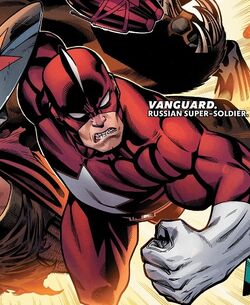 Born in Minsk, the son of Russian nuclear physicist Sergei Krylov (later, the Presence), Nikolai Sergeievich Krylenko (Russian: Николай Сергеевич Крыленко) and his twin sister Laynia Petrovna (Darkstar) were taken from birth by the then-Soviet government to be trained as soldiers after their mutant natures manifested. Joining the KGB-sponsored Soviet Super-Soldiers, Vanguard and the team came into conflict with many American heroes, especially Iron Man. [2]

Later, the government wanted the threat of the Presence eliminated and sent his own children, unaware of their true relationship, to murder him. They learned that he was their father and turned against the Soviet regime. Vanguard, Darkstar, and Ursa Major became agents on their own, fighting for the good of the people.[3]

At one point, finally fed up with the Communist system, the three heroes defected to the United States, only to be captured and returned to the Soviet states by the government-sponsored People's Protectorate. They were rendered comatose for some time, and held in a research facility for study.[4] There, they were rescued by Blind Faith and his band of mutant exiles in order to form an underground team that would fight for the people under a government that hates and fears them, and, ultimately, became members of the Siberforce.[5]

Later, Vanguard and Darkstar were asked by Quasar for help in defeating the threat of the alien Starblasters, who coveted the power of the mysterious Star Brand, hosted in the body of Quasar's girlfriend. Vanguard was killed in battle.[6] A grieving Darkstar blamed Quasar for her brother's death, and fled back to Russia. Later encountering her father again, Darkstar shared her feelings with him, and the Presence forced Quasar to flee Earth or risk his vengeance.[7] The Presence visited the memorial to his son and sought to revive him. He shifted his atoms to microscopically enter the body of his son and discovered a trace of his mutant energy remained, keeping him faintly alive. The Presence nearly exhausted his own power, but managed to resurrect his son.[8]

A staunch Communist despite the fall of the Soviet Union, Vanguard once aided Communist sympathizer General Tskarov in his efforts to undermine the American economy and replace it with communism, starting with its businesses on the East Coast. He also agreed to aid Tskarov in order that Tskarov would help him find his then-missing sister. When Ursa Major discovered Tskarov was actually hiding Darkstar from them, Vanguard joined with his friends and Daredevil and the Black Widow to defeat Tskarov.[9] Under circumstances yet to be revealed, Vanguard agreed to membership in the Russian Federation’s newest super team, the Winter Guard. One of the first adventures of the Winter Guard was stopping (with Iron Man's help) the Mandarin's giant war machine in the shape of a Chinese dragon. [10]

The Presence, in the meantime, had been cast adrift in the subatomic reality he had entered through his son upon resurrecting him. There, he discovered new aspects of his power and atomic particles, and, when he had sufficiently regenerated, resumed his normal size and returned to the Forbidden Zone. There, he embarked on a plan to unite all of the former Soviet Union by transforming its people into a race of zombie-like radioactive beings living under a communal mind. He managed to convert several Siberian scientists, Vanguard and the rest of the Winter Guard, and the Avengers, who investigated the disturbance. The Presence's companion, Starlight, ultimately offered a surrender and used her own power to revive those who had been transformed and remand herself and the Presence to Russian custody. [11]

After Darkstar was killed while serving with the X-Corporation in Paris[12], Vanguard's desire to avenge or restore his sister led to a schism in the Winter Guard. Leading a new group called the Protectorate, Vanguard and his teammates made their way into Limbo, suffering losses and were betrayed by Fantasma, who regained her lost memories and was revealed as a Dire Wraith. Upon returning to normal space, the Protectorate joined forces with the Winter Guard against Fantasma and the Presence, who intended to spawn a new generation of Wraiths. Darkstar was indeed resurrected during this mission, but several members of the Protectorate and Guard were killed or lost in the conflict. Vanguard took up the shield and identity of the Red Guardian in the aftermath, becoming the eighth to use the name.[13]

When he and the Winter Guard tried to capture the Intelligencia, the group used the Zero Cannon on them, sending the team to space, but they still survived.[14]

Vanguard is a mutant who possesses an energy field that repels virtually all electromagnetic, kinetic and gravitonic energy. Originally he could only access his powers by crossing his hammer and sickle weapons in front of his body, whenever they left his side he'd be virtually defenseless.[15] With time however he would learn he can access his powers without need of a conduit, simply crossing his arms to engage its effect. Nikolai could also redirect any energy repelled by his natural force field back at its source. The full potential of his powers had not been tested. He has displayed the ability to fly by repelling the Earth.[5]

Vanguard is skilled in hand-to-hand combat, having been trained by the KGB.

Vanguard possessed the normal human strength of a man of his age, height, and build who engages in intensive regular exercise.

Like this? Let us know!
Retrieved from "https://marvel.fandom.com/wiki/Nikolai_Krylenko_(Earth-616)?oldid=6440689"
Community content is available under CC-BY-SA unless otherwise noted.