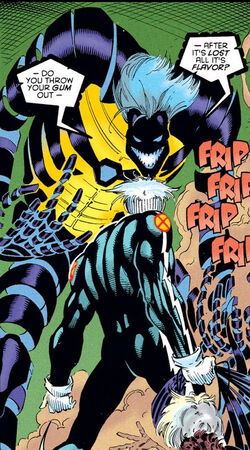 Little was known of Abyss' life before he became a Horseman of Apocalypse. It was said Abyss was experimented upon in Sinister's labs after escaping he killed the Horseman Bastion. Rather than have him killed, Apocalypse was impressed and appointed him as his new Horseman.[1]

Abyss was assigned to prevent the evacuation of humans from Maine to Europe by the X-Men and Sentinels.[2] However, he decided he'd rather capture Quicksilver, and kidnapped a young boy as bait. Storm intervened, causing this plan to fail.[3]

Abyss was then entrusted with overseeing the Madri and Shadow King's interrogation of Bishop.[4] The X-Men were dispatched to save Bishop, which resulted in another battle with Abyss. Abyss mocked Banshee and caught him in his void. Banshee's sonic screams ripped Abyss apart from within, apparently destroying him.[5]

Many years later, Dark Beast attempted to bring Abyss back to life after having preserved his corpse. His attempt was sabotaged by Fiend,[6] though the Dark Beast's experiments resulted in many other deceased mutants being brought back, and Abyss lived only for a few seconds.[7]

Abyss is an Alpha[8] mutant, granting him with the following powers:

Like this? Let us know!
Retrieved from "https://marvel.fandom.com/wiki/Nils_Styger_(Earth-295)?oldid=5513232"
Community content is available under CC-BY-SA unless otherwise noted.