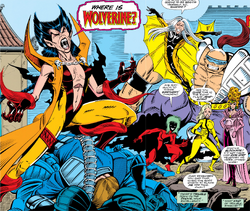 Some years before the War of the Worlds the mutants fled earth and settled a colony on Jupiter's moon Europa. That colony was destroyed in a battle with Apocalypse. The surviving mutants wandered through space for generations before settling on the planet Haven. Haven was led by Wolverine's descendants. By the 31st century Wolverine's great great great granddaughter Rancor ruled the planet.

The descendants of the mutant colony more often than not had human children. By the 31st century Haven had only 9 mutants and these mutants ruled the planet as the Nine with Rancor as their leader.

The Nine eventually came into conflict with the Guardians of the Galaxy. Bear, Rhodney and Blaster died in this first conflict which also involved the Stark.

Later the Nine were searching for Rancor's ancestor Wolverine in Madripoor. Rancor and the Nine eventually came into conflict with Dr. Doom who had placed his brain in Wolverine's adamantium skeleton.

Like this? Let us know!
Retrieved from "https://marvel.fandom.com/wiki/Nine_(Earth-691)?oldid=5549277"
Community content is available under CC-BY-SA unless otherwise noted.