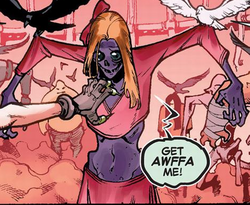 When fighting the X-Men, David Haller used the powers of select personalities in order to battle them with the aide of Sojobo-Tengu and Karasu-Tengu. Annie's powers were used to neutralize Frenzy.[1]

Zero-Tau Nullskin: Annie, as her name entails, does not conform to the laws of conservation of energy. In this case, when hit by Frenzy, David remained unaffected while Frenzy was thrown backward by the force of her own punch.

Like this? Let us know!
Retrieved from "https://marvel.fandom.com/wiki/Non-Newtonian_Annie_(Legion_Personality)_(Earth-616)?oldid=4246823"
Community content is available under CC-BY-SA unless otherwise noted.