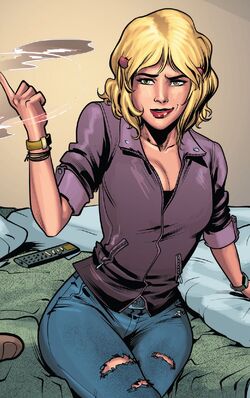 A young journalist working for the Front Line, Norah Winters usually made jokes about Peter Parker when they were investigating the Hammerhead assimilating Bronx gangs news story.[2] Norah also assisted Harry Osborn in solving the American Son and the Osborn mysteries when Harry's brother tried to kill him.[3]

Norah dated Randy Robertson for a short while before he decided to break up with her since he felt Norah was too obsessed with her job. She started dating her cameraman, Phil Urich who, unbeknownst to her, was the supervillain Hobgoblin and obsessed with her to the point of spying and stalking her.[4]

When Phil was exposed as the Hobgoblin by Spider-Man (Octavius), he took Norah hostage and threatened to kill her. Norah subdued Phil and then broke up with him, but because of her association with Phil following his being revealed as a criminal, Robbie was forced to fire her.[5] After being laid off, Norah moved to the West Coast, but eventually returned to New York.[6]

Back in New York, Norah began her own news organization, Threats and Menaces, and recruited Jameson as a staff member, all to generate online news articles given his history publishing buzz about Spider-Man. However, she also conducted her business and actions under the command of the Chameleon while he remained imprisoned, as it was he who funded her TNM business. Under the villain's orders, Norah also attempted to recruit Peter Parker, due to his connection to Spider-Man and intimate knowledge of the superhero community. But when offering the position, she didn't receive an answer.[7]

Learning of an attack at Empire State University, Norah interviewed survivors and learned about Sin-Eater's power theft of those he "cleansed." Finding those he killed were resurrected and sent to Ravencroft, she went to the asylum to interview the Lethal Legion members, who were model inmates. To her surprise, Mayor Fisk made Norman Osborn the head administrator after his return "to normal," and he permitted her interviewing them. After completing her objective and updating Jonah of her progress, she was met by Sin-Eater in her car, and she shot him in reaction. However, instead of killing her, he asked Norah to record his "call to arms" for New Yorkers, which she did and posted on the TNM website despite Jonah's objections.[8]

When Peter agreed to her job offer, Norah presented him with the TNM Spider-Man suit she had made for the hero and gave Peter a generous paycheck upon his hiring. When Spider-Man later wore the suit, Norah was ecstatic to see the ratings and relayed with Jonah how to direct Spider-Man's fighting for the sponsor for that evening.[9]

Like this? Let us know!
Retrieved from "https://marvel.fandom.com/wiki/Norah_Winters_(Earth-616)?oldid=6273899"
Community content is available under CC-BY-SA unless otherwise noted.