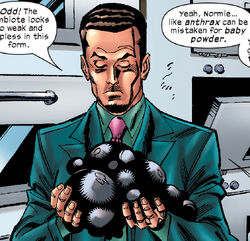 Hair
Brown
Unusual Features
Several tattoos from his life as the Green Goblin and scars from various suicide attempts, but these were removed as a parting gift from the Venom symbiote when it died. He also had fangs and a prehensile tongue when bonded to the symbiote.
Origin
Origin
Human;
Normie took up the Green Goblin mantle of his father and grandfather in the mission of ending the Spider-Goblin war forever.
Reality
Earth-982
Place of Birth
New York City, New York
Creators and Appearances
Creators
Tom DeFalco, Ron Frenz
First Appearance
What If? (Vol. 2) #105
(February, 1998)

I know what I'm doing. Anyone with enough strength of will to beat the Osborn curse can certainly control a simple alien symbiote.

The son of Harry Osborn grew up to be a sensitive boy. He took his mother's remarrying hard, never getting along with his stepfather, Foggy Nelson (until after her death when the two finally bonded), and he held Peter Parker responsible for the death of his father and grandfather. When his mother became ill and died, Normie broke down, accepting his father's and grandfather's mantle of the Green Goblin as his destiny. His appearance as the Green Goblin forced May Parker to adopt the mantle of Spider-Girl.[1]

His first few appearances met with failure as he was continually defeated by Spider-Girl, Phil Urich (as the "Golden Goblin"), and even in one instance by Mary Jane Parker.[2] Then one day, when May had temporarily lost her powers, Normie kidnapped her. Tied up and teasing her with a knife, May realized that Normie was hoping she would break free and kill him. At this time, May was able to convince him to go get help and to forsake the Goblin legacy.[3]

Normie reformed, and even helped May continue on as Spider-Girl during her temporary power loss by lending her his goblin equipment (Normie also confided in her that he was actually acrophobic).[4] He later also helped Phil Urich return to costume as the good Green Goblin. For a time, Normie converted one of his grandfather's old Goblin hideouts into a kind of "Batcave" from which May and Phil could use as a base of operations, which he christened "the Web Site." However, the Web Site was later located and destroyed by Canis' people.[5]

Through Spider-Girl, Normie met Brenda Drago (the daughter of Blackie Drago, the second Vulture), another former villain May tried to help reform. The two of them began a relationship, and Normie used his stepfather's legal firm to help negotiate Brenda's surrender for her outstanding warrants. Normie and Brenda's relationship began to affect May, however, who had developed feelings for Normie herself.[citation needed]

May confessed her feelings to Normie, but Normie did not think it would be appropriate (or legal, as Normie was 19 and May was 15, and there was no way that Mr. Parker would give him permission to date her, considering he was none too thrilled that they were even friends).[6] However after he was shot in the chest by Mr. Nobody (who shot him to mess with May's head), Normie's true feelings were revealed in a coma vision where his grandfather taunted him: "All you had to do was kill the girl. But no you had to fall in love with her, and how's that working out for you, Normie?" The vision of Norman also taunted him, saying, "You will never truly be rid of me."[7]

His relationship with Brenda became rocky for a time when Élan DeJunae appeared to inform him of their betrothal which had been arranged by her father and Norman Osborn when Normie and Élan had just been children.[8] Normie was not thrilled with the news, and Élan decided it was up to her to make sure that Normie was true to the family legacy. First, she attempted to expose him to the Goblin chemicals, but she was foiled by Spider-Girl. Normie was submerged in the chemicals for a long time, but he said the doctors gave him a clean bill of health.[9] Next Élan objected to his wedding to Brenda by literally crashing their engagement party. She forcibly bonded the Venom Symbiote to him as a "wedding gift." The new Venom went on a rampage until Normie with the help of Spider-Girl was able to gain control of the symbiote. May told him to cast it into the fire, but Normie could not bring himself to kill it. "I overcame the Goblin legacy, I should be able to control a simple alien symbiote."[10] It looked as if Normie wished to use the symbiote to be a hero. However, he was afraid to repeat what happened at the engagement party. He told his secretary Kristy Watson (Normie's nanny growing up and MJ's cousin), that if the alien ever took control of him again, to have Spider-Girl destroy him.[citation needed]

His superhero persona operated without a name for a time. They objected to being referred to as "Venom" (because Venom was the symbiote with Eddie Brock) or "Normie" (preferring to keep his identity secret) while out patrolling but "all the good ones [names] are already taken." When in control of the symbiote, Normie resembles Spider-Man's black costume.[citation needed]

When the Avengers came to arrest him for harboring the Venom Symbiote, the cyborgized-Jim Rhodes short-circuited (claiming that Tony Stark murdered him) and went on a rampage in New York City. In the end, Normie with the Venom Symbiote saved the day because he was the only one who did not hold back -- he snared Rhodes with the symbiote and then grabbed onto a live wire from inside a streetlight, electrocuting both himself and Rhodes, with the short-circuiting Rhodes falling first. Afterwords, he informed them that Raptor was a government agent and so "surrendered" to her custody. He voluntarily joined Kaine's team of reformed supervillains on the condition that Raptor (who did not get along with Whedon, its director) may be allowed to quit.[citation needed]

The symbiote had been vulnerable when Peter Parker rejected it, and it was corrupted by the hate and anger of the second host (Eddie Brock). When it bonded to Normie Osborn, it was changed by his loving nature. When the symbiote gave its life to protect Spider-Girl and her father from the Hobgoblin, Normie felt it die.[citation needed]

Both Normie and Brenda returned.[11] Normie agreed to fund an operation to restore most of the hearing of May's baby brother, Benjamin Parker.

Normie summoned Peter to an old Oscorp warehouse, and revealed a girl in a tank, discovered during his travels abroad, and claimed that SHE may be the real May Parker. Normie showed Peter his grandfather's journal, which stated that he kidnapped May and arranged to have a clone of her returned to the Parkers. With the veracity of the journal in question, Normie and Peter attempted to discover the truth without informing May of their discovery and its possible implications. Normie visited Élan DeJunae and questioned her without success; although her body language at the mention of "Project: Changeling" implied that she knew something, she is unwilling to talk. Later on at the warehouse, Peter (with Normie present) drew some fluid from the tank in order to run some tests on it. Peter realized too late that the fluid had become unstable from exposure to air--it exploded in his face to Normie's distress. The girl was later awoken by a recently-escaped Fury, and assaulted Normie before making her escape. Normie helped Peter overcome his grandfather as he took over Peter's body.[citation needed]

Athlete, able to lift up to twice his body weight.

Like this? Let us know!
Retrieved from "https://marvel.fandom.com/wiki/Norman_Harold_Osborn_(Earth-982)?oldid=5839523"
Community content is available under CC-BY-SA unless otherwise noted.