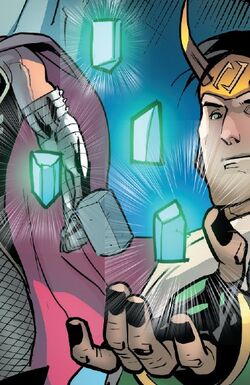 The Norn Stones are enchanted stones belonging to Karnilla; they are often used in schemes by Loki, and were later used by Sif. Loki explains that the effect of the stones vary from person to person, depending on whether the stones accept the user and what they desire. Norman Osborn was unable to use, move, or affect the stones in any way.[1]

While tracking down the escaped Fenris, the Warriors Three used the Norn Stones to travel between Midgard and Nifelhel.[2]

Following the Hood's depowerment, Loki presents him the Norn Stones to grant him back the use of his powers. Loki later reclaimed the stones during the Siege of Asgard to give the Avengers a fighting chance against the Void, by using the stones to temporarily boost their powers. Unfortunately, the Void realized his enemies' source of power and killed Loki.[3]

In this reality, the Norn Stones are made of the same substance as Mjolnir, and are the "avatars of power" for Asgard.[4] There are 24 sacred runes that, when placed in proper sequence in an access portal in northern Germany, allow gates to open to seven accessible realms, as well as a "room with no walls".[5] Loki used the stones to launch a massive invasion of Earth through Central Park.[6]

Like this? Let us know!
Retrieved from "https://marvel.fandom.com/wiki/Norn_Stones?oldid=6435460"
Community content is available under CC-BY-SA unless otherwise noted.