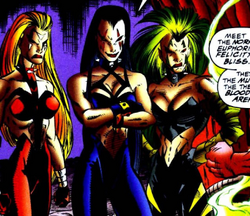 The Norns were a group of female fighters working for the Theatre of Pain. They were involved in the the Theatre's bloodsports. The other 3 Norns were not pleased when La Lunatica left the group. La Lunatica would later face her former "sisters" when she and the X-Men infiltrated the Theatre to rescue Xi'an Chi Xan.[1]

La Lunatica is Brimstone Love's biological daughter. The other Norns called Luna "sister", a term she refuted. Book the mutant savant and Vulcann the Bloodsmith both mentioned that Brimstone Love had other children besides La Lunatica.

Like this? Let us know!
Retrieved from "https://marvel.fandom.com/wiki/Norns_(Earth-928)?oldid=5549287"
Community content is available under CC-BY-SA unless otherwise noted.