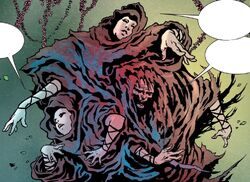 The Fates delight in dissembling -- pay their prophecies no heed!

The Fates are three sisters who act as overseers of the fates of the people of Ten Realms (where they are known as Norns) and as oracles to the Olympians (who also know them as the Moirae).

The Norns, sisters Skuld, Urd, and Verdandi, were the overseers of the fates of the people of the Ten Realms. They made their lair in the roots of Yggdrasill, the World Tree. The Asgardian Thor, Valkyrie, Balder, and many others consulted the Norn's wisdom over the centuries.[6]

Thor once consulted the Norns to learn how he could wield the mighty weapon of Mjolnir. The Norn told Thor that he must face 'Death' before he could wield such a powerful weapon. It was revealed this meant the Death-goddess Hela.[6]

Enitharmon the Weaver studied the woven experiences from the Norns, among others, and learned many interesting patterns and fabrics from them.[7]

The Fates were mentioned and invoked during the ancient times:

The Fates/Norns met with Brunnhilde, who had just arrived at Asgard. They led her to the Well of Mimir and revealed to her visions of an upcoming future. The visions involved Hela at war with a rival, civil war in Valhalla, death decimating mankind and claiming Valkyrie's fellow Defenders, and Valkyrie herself banished to Niffleheim. The Norns claimed that this future could not be prevented.[3]

During the final Ragnarok, Thor confronted the Norns who had learned that their powers were given to them by Those Who Sit Above In Shadow so they could manipulate the destiny of the Asgardians and trigger constant Ragnaroks to feed Those Who Sit Above in Shadow. Wanting to end the continuous Ragnarok cycles the Asgardians were subjected to, Thor ripped apart the Loom of the Fates, destroying everyone within Asgard, including the Norns.[19]

The Norns later turned up alive during the events known as the Siege of Asgard. They confronted the Dark Avenger Daken with a request for him to bring about Ragnarök. Daken eventually decided against it.[20]

The Norns were in Karnilla's Nornkeep when the Dark Council launched a massive invasion in order to prevent the Norns from determining the group's destinies. The Norns were separated and able to flee, but Nornkeep was destroyed, and Karnilla killed.[21]

The Norns learned the Wyrd Ways of the Weavers[22] and knew interesting patterns and fabrics.[7]

Retrieved from "https://marvel.fandom.com/wiki/Norns_(Fates)_(Earth-616)?oldid=5834077"
Community content is available under CC-BY-SA unless otherwise noted.