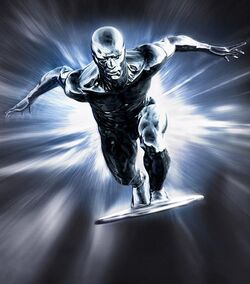 The Surfer agreed to become Galactus's herald in return for the safety of his home-world, Zenn-La, and the woman he loved, Shalla-Bal. Instead of having innate power (the Power Cosmic), his power came from the board itself, which also served as a beacon for Galactus. In the end, after the Surfer turned on Galactus, who appeared to explode. Afterwards, the board, which was floating by itself in space, suddenly realigned itself and flew toward the Surfer.[1]

Seemingly those of the Silver Surfer of Earth-616, except that they come from the surfboard itself and without it he is powerless.

Like this? Let us know!
Retrieved from "https://marvel.fandom.com/wiki/Norrin_Radd_(Earth-121698)?oldid=6059935"
Community content is available under CC-BY-SA unless otherwise noted.