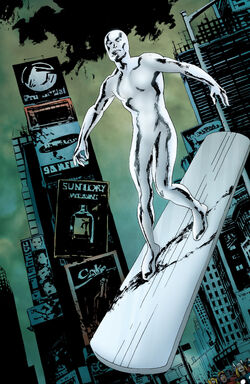 Little was detailed about Silver Surfer’s life before he arrived at the zombie plague infected Earth-2149, however it can be presumed that it followed much the same path as his Earth-616 counterpart. Presumably, had the zombie contagion not infected this Earth, the Silver Surfer would have met the Fantastic Four and turned against Galactus.[1]

Unfortunately, the whole Earth was gripped of this zombie plague. Though he was quickly overwhelmed by numbers, it took an enraged Hulk to finish him off. After which, he was quickly consumed, imbuing a portion of his Power Cosmic on those who had a piece.[2]

Like this? Let us know!
Retrieved from "https://marvel.fandom.com/wiki/Norrin_Radd_(Earth-2149)?oldid=5346679"
Community content is available under CC-BY-SA unless otherwise noted.