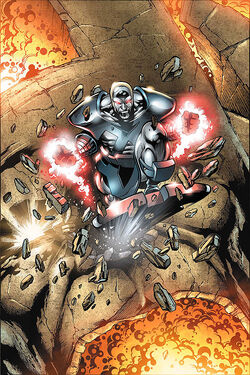 Norrin Radd was a military scientist whose latest and "greatest" invention had laid waste to his homeworld, Zenn-La. Filled with remorse for what he had done to his world, Norrin sought Galactus, the World Restorer, in order for the entity to repair his planet. He suggested to Galactus turning himself (Radd) into a herald, the Silver Surfer, to scout out distant planets, damaged by the Blight, and repair them. He also planned to secretly learn the Restorer's powers. When the Silver Surfer requested Galactus' intervention in repairing Zenn-La, Galactus refused, as his duty was to repair only planets that were destroyed by the Blight. This angered the Surfer, and he used his powers to harm and destroyed those who worshiped Galactus and eventually against his master. He destroyed Earth in the process, suggesting that he knew the potential of Earth's heroes in the universe. After weakening Galactus, the Silver Surfer came into conflict with the Shi’ar Imperial Guard, who protected Galactus. Norrin easily massacred the Imperial Guard. As the Surfer faced Galactus again, he was attacked by Blink of the Exiles, who was briefly controlled by Galactus, and was then teleported away to Saturn.[1]

The Silver Surfer later managed to trace his former master to the Shi’ar homeworld and fought against the combined alien races who stand against him. He again came into conflict with Blink and was then soon challenged by a Power Cosmic-enhanced Sabretooth, who was turned into a herald by Galactus. The Surfer underestimated the new herald and was slashed and then impaled by his own cosmic board. As he laid mortally wounded he was confronted by Manta, the last member of the Imperial Guard and wife of Gladiator, who was previously killed by the Surfer, and was finally killed by her with his own board.[2]

Like this? Let us know!
Retrieved from "https://marvel.fandom.com/wiki/Norrin_Radd_(Earth-552)?oldid=5568696"
Community content is available under CC-BY-SA unless otherwise noted.