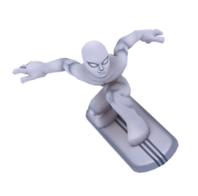 My luck is outta this world!

Silver Surfer appears in The Super Hero Squad Show voiced by Mikey Kelley. This version of him has a literal "surfer dude" accent, and is much more kid friendly, but the third episode develops more on his personality. The episode "Invader from the Dark Dimension" reveals that he is a horrible cook (due in large to a lack of taste buds), so much so that even Dr. Doom fears his meals. His teammates have trouble living with him due to his strange personality such as reversing gravity so that everyone can have breakfast upside down on the ceiling. In the episode "The Last Exit Before Doomsday" he makes the first reference to his past working for Galactus, after the appearance of Stardust (another one of Galactus' heralds). In the show, he describes Galactus not as eating planets whole but rather "Taking several bites and chewing thoroughly". In the episode "This Al Dente Earth," Silver Surfer persuades Galactus to spare Earth promising to find planets with non-intelligent life for Galactus to feast upon. Upon leaving the Super Hero Squad, Silver Surfer takes the possession of the Infinity Sword (which he revealed that it can only be wielded by someone who wields the Infinity Gauntlet) and leaves with Galactus to find planets with non-intelligent life. In the episode "Alienating with the Surfer," it is shown that the Infinity Sword is slowly corrupting the Silver Surfer even to the point where he prevented Ronan the Accuser from coming to the aid of the Skrull Homeworld when Galactus plans to consume it. Thor and Scarlet Witch come to Silver Surfer's aid and Silver Surfer traps Ronan the Accuser in a pocket dimension. Silver Surfer then tells Galactus not to eat the Skrull Homeworld and directs him to a section of planets with non-intelligent life. In "Fate of Destiny," Silver Surfer arrives to help the Super Hero Squad fight Thanos. However, he steals the Infinity Gauntlet from Thanos, traps him in the Soul Infinity Gem, and becomes Dark Surfer. As the Dark Surfer, he sends the Super Hero Squad into different portals.

Like this? Let us know!
Retrieved from "https://marvel.fandom.com/wiki/Norrin_Radd_(Earth-91119)?oldid=6520845"
Community content is available under CC-BY-SA unless otherwise noted.