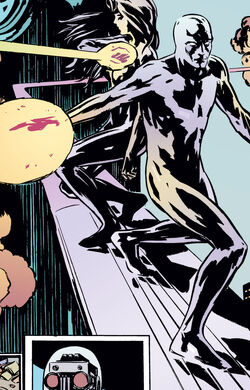 The history of Norrin Radd of Earth-9997 mirrors that of his Earth-616 counterpart, however it is revealed that why Galactus chose to devour Zenn-La was because it was impregnated by the Celestials.

In recent history on Earth-9997, Reed Richards would use his scientific expertise to change Galactus into a star. This would upset the balance of the universe and the Celestials would potentially overrun the universe. The Silver Surfer and the High Evolutionary would convince Reed Richards that a new Galactus would need to be created. Using the High Evolutionary's equipment they would speed up Franklin Richards' mutant evolution to the third tier of mutation where ones powers and existence is defined by how others perceive you. Franklin would become the new Galactus, however the Surfer would become his herald once more to insure that Franklin would continue to believe he was Galactus.

During his time as a Herald of Galactus, Norrin's lover Shalla-Bal would also be given the Power Cosmic and join him in surfing the spaceways. When the Celestials had come to Earth following the mutation of all of mankind to enact their Final Host, Black Bolt would summon Galactus to come to Earth and fight the Celestials.

Norrin and Shalla-Bal would arrive as well in order to help fight the Celestials, sadly, Shalla-Bal would be killed in battle. Following the defeat of the Celestials, and the destruction of the Celestial embryo growing in Earth's core, Galactus would leave Earth, but the Surfer would stay behind. When the Human Torches were constructed to burn the Terrigen Mists out of the Earth's atmosphere, the Surfer vowed to Marshall Maldoon that no matter what, the Torch in New York would never go out.[citation needed]

Seemingly those of Norrin Radd of Earth-616.

Seemingly those of Norrin Radd of Earth-616.

Like this? Let us know!
Retrieved from "https://marvel.fandom.com/wiki/Norrin_Radd_(Earth-9997)?oldid=6129666"
Community content is available under CC-BY-SA unless otherwise noted.