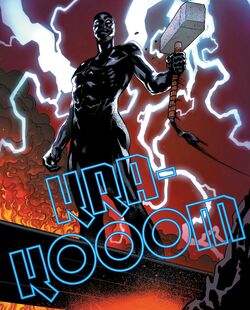 The Silver Surfer and his master, Galactus, were both hunted across the stars by Thanos. After saving Galactus' life by teleporting him away, the Surfer somehow managed to escape from Thanos. Believed dead by his former master, the Surfer watched from afar as the Great Devourer was killed by the Mad Titan centuries later.[2]

Not powerful enough to take on Thanos, Norrin spent millenia becoming worthy of Mjolnir.[3] In the meantime, Thanos prepared for Norrin's eventual return by having his younger self dragged to the future by the Rider.[4]

Returning to Earth with the Annihilation Wave at his back to face Thanos, Norrin (now the jet black Fallen One after having been further imbued with Black Matter, the "binding halo by which galaxies are made solvent")[1] battled the Twin Titans and the Rider. After the Annihilation Wave was burned down by the Rider, the Fallen One blasted them and summoned Mjolnir to his hand.[2]

After disposing of the Rider, the Fallen One was attacked by the Hulk, who he had inadvertently unleashed. Upon seeing what had become of his friend, Norrin calmed him down, making him return to his human form moments before King Thanos stabbed both in the back with the Twilight Sword. With Bruce dead, a vulnerable Norrin was viciously killed by the Twin Titans.[5]

His corpse was later used by the younger Thanos to fuel a shard of the Time Stone with Power Cosmic so he could return to his own timeline to preempt this future.[6]

Like this? Let us know!
Retrieved from "https://marvel.fandom.com/wiki/Norrin_Radd_(Earth-TRN666)?oldid=5787734"
Community content is available under CC-BY-SA unless otherwise noted.