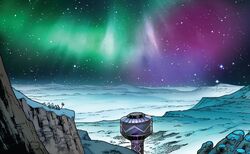 The North Pole, defined as the point in the Northern Hemisphere where the Earth's axis of rotation meets its surface.The North Pole is the northernmost point on the Earth, lying diametrically opposite the South Pole.

A Plodex alien ship crash landed 40,000 yeas ago, and began conducting experiments on a man who will come to be known as the Master of the World.[1]

The Frankenstein Monster was frozen inside of a glacier after an avalanche in 1799.[2]

The Kallusians landed upon the North Pole and kidnapped Doctor Svenson, to help them breath the Earth's oxygen. They built an entire underground city, which was eventually discovered by the Avengers, who were looking for Doctor Svenson in order to save Wasp's life. When the Kallusians were discovered by their enemies and had to flee, the Avengers and Dr. Svenson were brought back to America through a matter displacer.[3]

Like this? Let us know!
Retrieved from "https://marvel.fandom.com/wiki/North_Pole?oldid=5847070"
Community content is available under CC-BY-SA unless otherwise noted.