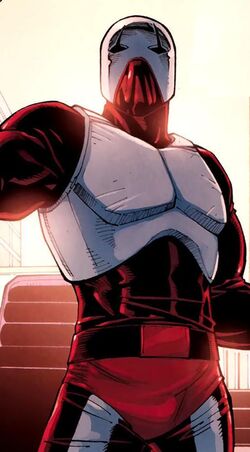 This means good-bye to Norton G. Fester, professional failure! and it means hello to--to-- what?

A meteor fell to earth in an unnamed region and was found by Norton G. Fester. He believed the meteor would have contained microscopic living matter which would solve the riddle of the universe. Unfortunately, when he went to some scientists to help him in his funding, he found that they are more interested in finding new formulas for hair tonic and they told him to try a bank. Similarly the bank wasn't interested and he resolved to find out the secrets by just chipping away at the meteor.Suddenly a gas was released from the meteor and Norton Fester gained incredible strength.[3]

Deciding on a life of crime, Fester became the Looter. He was actually a very successful thief, until he got worried when the meteor he had ran out of gas. He tried to steal one from a science museum, hoping it had another gas pocket, but was thwarted by Spider-Man. After making a narrow escape, he tried again, but was caught once again BY Spider-Man.[3][4][5]

After spending years as a model inmate in the State Penitentiary, Fester was reassigned to Bill Gordon's cell. Gordon immediately began ostracising Fester, claiming that he was a phony who possessed no real power, because if he did he certainly would have used it to break out of prison. Fester claimed that he was such a law-abiding citizen before he got his powers that he never thought to break out of prison. Now, however, Fester used his fantastic strength to crash through the prison wall and escape. He was next seen again in his Looter costume stealing a meteor specimen from the New York City penthouse of Kyle Richmond. Richmond walked in on the theft dressed in his alter-ego of Nighthawk, but Fester caught him off-guard and knocked him out, stealing a valuable meteorite specimen that Richmond had purchased from the science museum. Nighthawk warned Spider-Man of his old foe's return, so he went to Fester's old hideout to find clues as to his whereabouts. Fester, now calling himself the Meteor Man, ambushed Spider-Man, nearly sending him plummeting to his death, before using his modified parachute/balloon to escape.[6] The Meteor Man came across Spider-Man yet again later that week and attacked him for probing into his whereabouts. He quickly defeated Spider-Man and dumped him into the East River, warning him to leave him alone. Later that same day, the Meteor Man robbed an antiques store of a famous statue made from the stone of a meteorite that landed in Russia two hundred years ago. He was opposed by Spider-Man and the Valkyrie, but was able to get away from the antiques store. The two heroes chased him as he floated away under the power of his balloon. The Meteor Man again got the best of Spider-Man, but Valkyrie threw her sword, Dragonfang, through his balloon, causing him to plummet to the ground below. He survived the fall thanks to his powers of invulnerability, but would spend months in hospital recuperating from his injuries.[1]

The Defenders' existence is exposed to the general public when Dollar Bill's documentary airs on television. Sagittarius and Libra form a band of criminals to commit crimes, claiming to be Defenders in order to ruin the group's good name.[7] Norton joined Sagittarius' team but they were defeated by the true Defenders and the Defenders for a Day.[8]

Fester attacked the Empire State University Colosseum in order to steal a device on display to boost his powers, attracting the attention of Spider-Man, and Giant Man (Bill Foster) who was giving a lecture at the time. Fester managed to escape, however not before he was tagged with a Spider-Tracer. Spidey and Giant Man went after him where they have found that he has built a device that channels the powers of stolen meteors into his body. This causes him to grow to gigantic size, and give Giant Man and Spider-Man a good fight. However, when the transmitter device malfunctions, the resulting overload of power causes the Meteor Man to seemingly be destroyed in the resulting explosion.[9]

Months later Fester started drinking and soon became homeless. Living in the streets of Forest Hills, Queens, he fought Spider-Man again, blaming him for all his disgraces. Spider-Man easily defeated him and Fester was sent back to prison.[10]

When he battled Spidey again, Spidey easily defeated him as he reminisced about villains that were harder to deal with.[11]

Fester worked with Override and Aura to battle the Scarlet Spider.[12][13][14]

When Ben Reilly was acting as Spider-Man, Fester stole weapons used by various criminals in order to fund his research. Even S.H.I.E.L.D. was after his work because of its importance. After Ben defeated Fester was imprisoned on the S.H.I.E.L.D. Helicarrier.[15]

The Looter was the criminal Spidey fought as the Hornet when he attacked the Daily Bugle in order to steal the ransom that Norman Osborn was offering for Spider-Man. He spoke to the meteor as if was a person, but their was no evidence that it was sentient.[16]

He was one of the bidders at the auction for the Venom Symbiote.[17]

He later attempted to steal yet another meteor, at a museum display, to grow further in power. Spider-Man defeated him once more in the museum bathroom, in front of a woman named Vanna Smith, who was obsessed with the wallcrawler.[18]

Fester tried to find the twin of the meteor that gave him his powers. But during the fight with Spider-Man hen revealed that the Fantastic Four would have equipment he would need. He stole Ben's Sky-Cycle and the tracker from the Baxter Building to find the meteor in the Savage Land. When they find find him he was being attacked by Stegron after asking to look at the rock held at the top of a structure in Stegron's kingdom. The heroes saved Fester and engaged Stegron's forces, which attracted the attention of Ka-Zar, Shanna, and Zabu. Fester climbed the structure only to find the rock was not the meteor. Spidey put his foot in it again when he stated that it looked like something that gave Dr. Strange trouble once. Fester took off through a nearby portal back home. They followed and found themselves outside Stephen Strange's Mansion. Inside, Strange was sharing tea with the Looter while listening to his story. Spidey pulled him aside to explain what was going on, but Strange's medical side has taken an interest in Looter's case and had agreed to use his mystic powers to help. The Eye of Agamotto revealed that the meteor had landed in Latveria. Looter escaped but before Spidey could give chase, Strange restrained them, insisting he had a reason to let the Looter escape. As expected, he stole the Fantasti-Car which allowed Mr. Fantastic (Reed Richards) to remotely pilot it back to the Baxter Building where the heroes and Strange converged. Reed pondered examining the meteor, but S.H.I.E.L.D. arrived and took it and Fester into custody. As he was taken away, he overheard Reed say that given trajectories that the other meteor, if there was one, it most likely landed on the moon.[19]

Spider-Man captured Fester after a robbery and web him up against a building wall. Norton told Spidey that Norman Osborn was running the show and his stay in a jail cell wouldn't be too long. Spidey got in Fester's face and gave him an ultimate wedgie before he left.[20]

Origin of the Species

Fester met with Screwball before he was attacked by Spider-Man, suspecting he might be responsible for the abduction of Lily Hollister's baby. Fester plead with Spider-Man that he never even touched Lily's baby.[21][22]

Fester and a group of men attacked the Federal Hall on Wall Street, but were stopped by Spider-Man and the new Power Man. The criminals were there to find a hidden secret locked in the building. Fester used a old key from the 1700s to open a floor chamber and used his dazzle gun on the heroes to temporarily disorient them. Fester found the fallen star that was discovered by Freemason Benjamin Franklin and used in their rituals for centuries. Fester planned to use the vapors from the fallen meteor to increase his power when it started to crack. The meteor was actually an egg and an alien octopus creature emerged. Power Man killed the alien creature with the pole of an American flag while Fester and his men were taken into custody.[23]

Spidey and Silk ran into Fester when he stole a Spider-Tank and a Spiderlings outfit from Spider-Island II. They defeated him while his fleeing henchmen were defeated when the Spider-Army arrived.[29]

While transporting fake assault rifles, the Looter encountered Venom, who accused him of arms-dealing. Terrified by the monstrous anti-hero's reputation for cannibalism, Fester immediately surrendered, but Venom's symbiote went berserk and tried to devour him. Looter fled while Eddie Brock struggled to control the symbiote, later venting to a bartender at a pub frequented by street-level criminals. The symbiote-augmented supervillain Maniac forcibly recruited the Looter into his Inklings,[2] though Fester was later freed from his control by Agent Anti-Venom, Spider-Man, Black Cat, and Mania.[30] While robbing a carpet store, the Looter was accosted by Venom a second time and was afraid he was going to try to eat him again, but the symbiote had been cured and Venom simply webbed him up to take him to the police. Spider-Woman interrupted and attempted to apprehend Venom, who threw the Looter as a distraction to escape.[31]

Like this? Let us know!
Retrieved from "https://marvel.fandom.com/wiki/Norton_Fester_(Earth-616)?oldid=6084915"
Community content is available under CC-BY-SA unless otherwise noted.