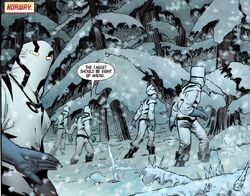 Norway, officially the Kingdom of Norway (Kongeriket Norge), is a sovereign and unitary monarchy, neighbor and former united to Sweden,[1] and whose territory comprises the western portion of Scandinavia.

Norway had been settled more than 10,000 years ago after the last Ice Age by hunters following the herds of various herds to newly uncovered pastures, and brought their gods with them.

They existed in various independent clans.[1]

In 872 AD, the clans were united by Harold Haarfager into the Vikings, these Norse sailors then went forth to trade, explore, and raid much of Europe.[1]

In 896 AD, Bodolf became a great warrior by praying to Thor before every single one of his battles, with the God of Thunder usually appearing in the flesh to help him fall his enemies. But over time he became cocky and forgot to pray.With his army routed, his lands seized, and his wealth gone, Bodolf resorted to praying once again, but to a different god, Loki. Loki eventually appeared before Bodolf and directed him in a quest for power to rival Thor. Bodolf embarked in a journey to kill a dragon and drink its fiery blood. He drank his blood becoming a monster.[2] With his newfound power, he battled Thor. After a furious battle that took them across the globe, both warriors returned to Norway. When Loki began to cheer for Bodolf, the viking soon attacked the god, unwilling to be a puppet. Thor caught a second wind and punched Godolf through the Earth to the southern pole of the planet. The defeated viking proceeded to wander the Earth, fighting to suppress the monster inside him.[3]

In the year 1003 AD, the coastal village of Lakstad was wiped from the map when Harald Jaekelsson and his crew murdered the entire population of the town.[4]

In the year 1248 AD, a group of Vikings were exiled from Norway and traveled west along the Atlantic. They eventually settled on an uncharted island where they lived in seclusion for many centuries until the 20th Century.[5]

The young Thor immature Thor would often come to Midgard and join their adventures but stopped after witnessing them sack a monastery.

The Vikings later converted to Christianity and the Asgardians drew from Midgard.[1]

In 1319 AD, the nations of Norway and Sweden merged when Magnus Eriksson of Sweden became first in line on the throne of both countries (at three-years-old). This did not last long, but a few decades later the two nations merged again under the rule of Eric of Pomerania who was crowned King of Norway, Sweden and Denmark.

Sweden later split while Denmark and Norway remained one nation.

In 1814, A.D., as a result of the Napoleonic Wars, Norway split from Denmark and entered into another union with Sweden.[1]

In 1905, Norway became an independent nation once again.[1]

Norway declared itself neutral during both World War I.[1]

During WWII, Norway again declared its neutrality, but was still invaded by Nazi Germany.[1] Namor king of Atlantis led an army of Atlantean Aero-Subs in an attack on Nazi U-Boats in the Northern Sea off the coast of Norway.[6]

During a mission to Norway, the Howlers are intercepted en route to their mission objective, making Sgt. Nick Fury begin to question if they were the victims of a traitor. They later learned Izzy Cohen was being mind controlled and freed him and not down the Nazi operations.[7]

Norway was the landed site for the Kronan invasion of Earth. Dr. Donald Blake was on vacation in Norway at the time drawn to the country for some unknown reason. He witnessed the invasion and escaped to a nearby cave. In the cave he found an old cane and when he tapped it on the ground he was transformed back into Thor learning his true origin. He used his returned powers to stop the alien invasion. The Kronans went on to attack NATO forces, driving them off with an illusion of a dragon. When Thor came to fight them, they lowered a cage over him to capture him, but he smashed through. They aimed their disintegrators at him, but he smashed them with his hammer. Finally, they unleashed the Mechano Monster, but Thor destroyed it with a single blow. Terrified of Thor, the Kronans fled earth.[8]

Thor is helped with the filming of a Viking movie. He pretends to defeat a sea serpent while conjuring up a thunderstorm. Loki, watched from Asgard, used his magic to magnetically attract Thor's flying hammer to his uru chains, breaking them and setting him free.[9]

Thor rushed to Norway and landed upon an obscure Norse rooftop to find out Doctor Svenson, the only man who might be able to save Wasp, who was dying of lung damage.[10]

The Avengers were transported on leviathan-class assault platforms over the Borge Mountains to battle Ultron in Slorenia.[11]

The Dream Master used to live in an abandoned nazi bunker on a desolate section of the coast of Norway, where he operated his Dream Machine against Iron Man.[12]

Magister Karnak traveled to Svalbard, Norway, above the Arctic Circle. Here, he is greeted by Phil Coulson and Jemma Simmons, Agents of S.H.I.E.L.D.. They brought him there to hire him to help find a young Inhuman Adam Roderick.[13]

In 965 A.D., the Frost Giants attacked the village of Tønsberg, Norway planning to conquer Midgard. They used the Casket of Ancient Winters to freeze the realm. Odin and the Asgardians arrovbed and engaged in a war against the Frost Giants, forcing them to retreat back to Jotunheim.[14] In 1942, Johann Schmidt, leader of Hydra, attacked a town in Norway searching for the Tesseract. They find a find it in a local church.[15]

After the destruction of Asgard,[16] the remaining Asgardians immigrate to Tønsberg, and form the community of New Asgard.[17]

Gunnar Golman was part of a Norwegian team working on super soldier technology for the European Union. Allegedly, Thorlief Golman stole the team's successful prototypes to become Thor.[18] Despite this setback, the project continued working to create a European Union equivalent of the Ultimates taskforce forming in the United States.[19][20] Upon revealing himself to be Loki, and the backstory of the Golman brothers to be one of his deceptions, "Gunnar" pointed out that "Norway's not even in the European Union".[21]

Thor was found in a block of ice off Norway's windy coast by archeologist Dr. Donald Blake, who showed him to the Avengers. After managing to break the ice, they were confronted by Loki Laufeyson, who was then banished in the limbo realm.[22]

Like this? Let us know!
Retrieved from "https://marvel.fandom.com/wiki/Norway?oldid=6523874"
Community content is available under CC-BY-SA unless otherwise noted.