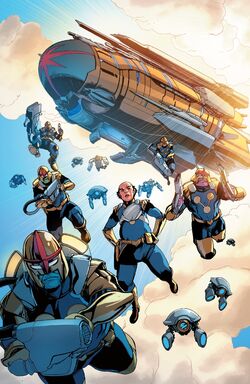 I'm currently trapped inside a pocket dimension after sacrificing myself to entrap an intergalactic warlord. So now I'm stuck here, trapped inside an alien supercomputer for the rest of my life. I'll never see my home, my friends or my family ever again. And I would do it all again because of one simple reason: what would have happened if I didn't. Peace and order aren't the natural state of things. They had to be invented and they have to be constantly defended. That's why the Nova Corps was created. That's the legacy that you carry on. Yeah, I know, down on Earth, you've got the X-Men, the Avengers, Spider-Man, everyone. It can seem like things are taken care of. But relative stability... It's a house of cards, Sam. And there are people and things trying to blow it all down every single second. We need all the heroes we can get.

Originally, the Nova Corps was Xandar's space militia and exploration division. It consisted of over 500 soldiers ranging in rank from Corpsman up to Centurion and its leader, Centurion Nova Prime. The Corps also had a regiment of Syfon Warriors, of which Powerhouse was one. After the reformation of Xandar, the Nova Corps expanded its protective range to include the entire Andromeda Galaxy and Earth. They are also known as the Xandarian StarCorps. Queen Adora (in the role of Prime Commandant) has ultimate authority of the Nova Corps.[3][4]

The source the Corps' power is called the Nova Force. This is a nearly limitless energy field generated by the a living supercomputer called the Xandarian Worldmind. The energy is then transmitted into the centurions at varying levels depending on their rank. The Worldmind contains the entire record of Xandarian history and civilization.[5]

A number of notable individuals were once members of the Corp such as former heralds of Galactus Firelord and the Air-Walker to name two.[6]

Recently the Nova Corps were assembled to face an unknown threat that had crossed the Kyln. Unfortunately, during the briefing, the Corps were taken by surprise by the attackers. Despite the fact that the every officer was granted full power by the Worldmind and their strong resistance, the entire Corps was decimated and in the ensuing destruction, Xandar was laid to waste.[7] However, Richard Rider managed to survive and while looking for survivors, came upon the then-offline Xandarian Worldmind. The supercomputer told the last Centurion that if he died, all Xandarian culture and the entire Nova Force would be lost. Reluctantly, Rider let the Worldmind reside in him until it could find a new world to inhabit.[5]

During the Secret Invasion, a new Nova Corps appeared to assist Richard Rider in his defense of the Project P.E.G.A.S.U.S. facility. The Worldmind had recruited them, having taken control of Rider's body while he was sleeping. Unfortunately, Worldmind began a mass recruiting drive, which Rider opposed, fearing of what could happen if they send untrained Novas into battle. Also, he had lobotomized Ego the Living Planet as a base for Nu-Xandar. When the Worldmind asked that Rider download the Nova Force into Nu Xandar, he hesitated. Worldmind, claiming that the Nova Force has taken its toll on Richards sanity, ordered the Corps to restrain him. Forcefully removing the Nova Force, Worldmind "deselects" Richard and returns him to Earth without his powers. Rider, with the help of Project P.E.G.A.S.U.S., learn that Worldmind was using a form of mind control, through use of subliminal messages and endorphin's, to control the Corps and make them not want to leave.[8]

When a war ignites between the Kree-led Inhumans and the Shi'ar, the Nova Corps stepped in to stop it. Unfortunately, they take massive casualties and the new Nova Prime, Malik Tarcel, was captured by the Shi'ar Imperial Guard. Richard Rider, who was stripped of his status by Worldmind, reclaimed the title of Nova Prime and decided to train the Corps as a probationary group.[9]

When Rider charged the entire Nova Force in order to stop Thanos while in the Cancerverse and subsequently went missing, the corps was left powerless and presumably disbanded. However, there was still hope in the form of former Black Nova Jesse Alexander's son, Sam Alexander.[10][11][12]

A new Nova Corps was eventually established, though it faced challenges due to its relative novicehood and the fact that the power vacuum left during their absence had been filled.[13] The Corps' former leader Richard Rider also came back to life after being visited by Sam Alexander in the Fault.[14]. In the wake of Richard Rider's return, the Corps began to rebuild at a much greater pace, recruiting beings from all over the galaxy, including a large number of ex-S.H.I.E.L.D. agents from Earth.[15] However, since this new Nova Corps still had to prove themselves, most planets refrained from sending their best soldiers, leading the Corps to be packed with scoundrels and criminals. In addition to that, the Fraternity of Raptors had deployed countless spies in order to subvert the Novas.[16]

Nova commander Scott Adsit sought help from the Guardians of the Galaxy to root out the corrupt officials.[17] Rocket Raccoon set in motion a plan to get rid of the Raptor spies, by temporarily capturing those that were simple scoundrels yet still loyal to the Nova Corps. The criminals were then freed by Rocket and Adsit after the spies notified the Raptors that Rocket's swept had supposedly unwittingly subverted the Novas, leading the Raptors to launch an attack, unaware that the Nova Corps would be stronger than expected.[16] The Raptors' attack failed and their forces were routed, while all the Raptor-loyalist Novas were arrested for good.[18]

The Nova Corps peacekeeping authority was vastly reduced when the Skrulls pulled out of the Pan-Worlds Jurisdiction Treaty. Which meant that the Nova Corps were no longer permitted to operate in the Andromeda galaxy.[19] Eventually, the Nova Corps was decimated once again, with all of its members being wiped out by an alternative-reality Universal Church of Truth[20][21] with the exception of Richard Rider who was away on a mission, leaving Rider as its sole surviving member.[22]

The Supernovas, or Black Novas, were originally an independent organization comprised of thieves and killers who would kill standard Nova Corp members and steal their share of the Nova Force from the victim. However, they soon became folded into the Nova Corp proper as a black ops group after a sting operation lead by Jessie Alexander, who served as a double agent on behalf of the Nova Corp. They are named the Black Novas after their black helmets, which are designed to harness the full power of the Nova Force, as opposed to the traditional 'Gold Domes' (regular Novas, due to their gold helmets), which only grant partial access to the Nova Force based on rank. Sam Alexander is the only Supernova left.[23]

Retrieved from "https://marvel.fandom.com/wiki/Nova_Corps_(Earth-616)?oldid=5809347"
Community content is available under CC-BY-SA unless otherwise noted.