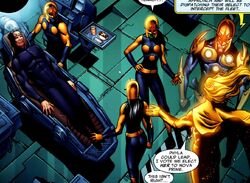 The Nova Corps was rebuild by Richard Rider who then began to feel the effects of Transmode Virus. The Nova fleet was travelling to Earth to drive the Phalanx from one of their last remaining strongholds. Rider was supposed to lead the troops into battle, however due to his condition and the Phalanx sending their Select to engage the Corps, Phyla-Vell was charged with becoming Nova Prime and to lead the assault.[1]

Like this? Let us know!
Retrieved from "https://marvel.fandom.com/wiki/Nova_Corps_(Earth-8041)?oldid=6533078"
Community content is available under CC-BY-SA unless otherwise noted.