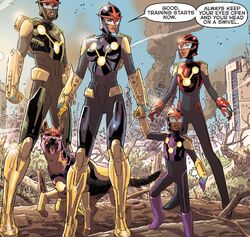 The Nova Corps were an intergalactic police force who tried to defend New Xandar from the Annihilation Wave, but failed and were decimated.[1]

One of the only known active Novas was Eve Bakian, who deputized her family, the Bakian Clan, as members of the Corps when she reunited with them.[2] Three of the Bakians' allies, Star-Lord, Gamora, and Groot, later became Novas in order to help distract a behemoth Annihilation Wave bug from them, and perished doing so.[3]

Retrieved from "https://marvel.fandom.com/wiki/Nova_Corps_(Earth-94241)?oldid=3973367"
Community content is available under CC-BY-SA unless otherwise noted.