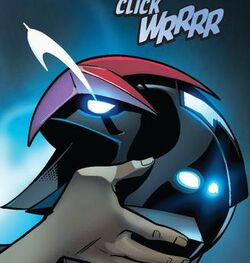 This Nova Corps helmet was designed to be used by members of the elite Supernovas. It was passed down to Sam Alexander from his father, Jesse Alexander. It has been used by other members, Mister Z'zz, Phlish, who seemed to have bonded with helmet rather than worn it, and the ex-Nova, Titus.[1]

Unlike a regular Nova Star, which receives its power directly from the Nova Force via the Xandarian Worldmind, the Supernovas receive their powers from on-board reactors in their helmets.[2]

The helmet was taken by Nova Corps Commander Scott Adsit when the Champions returned Warbringer to custody.[3] It was mysteriously stolen by a member of the Thieves Guild of New York and seen temporarily in the possession of Spider-Man.[4][5]

On Earth-18150, the Nova Helmet was first seen after Sam Alexander's 1000th adventure as Nova. His son, Jesse, whacked Sam on the head with a stick and took the Nova Helmet, because he felt it was his turn to become the worlds newest Nova.[6]

On Earth-12041, the Supernova Helmet is a level for the gold Centurion Nova helmets that can only be achieved after unlocking their full potential, these also appear to be the only type of helmets that have access to the Nova Force. Sam Alexander of this universe found this out after battling Titus.[citation needed]

Can translate languages from different species.[1]

Allows the wielder to breathe in space.[1]

Feeds information into the wielders brain and forces them to multitask.[8]

Enables the wielder to slow down when approaching something in its path and then speed up again when there is a clear path.[8]

Flashes different colors to warn the wielder of something.[8]

Grants the wielder the entire cosmic powers of the Nova Force.[1]

Transfers history of the past wielder.[11]

Retrieved from "https://marvel.fandom.com/wiki/Nova_Helmet_(Supernovas)?oldid=6121455"
Community content is available under CC-BY-SA unless otherwise noted.