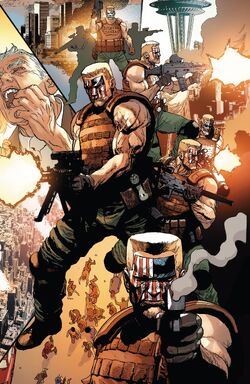 Our boys died fighting Hydra. Our boys stood up while the world bent the knee. Maybe you've forgotten them, forgotten that they died for you. But some of us soldiers survived! Do you hear me?! And a soldier never forgets!

This army of brainwashed clones of the super-soldier Nuke were bioengineered by Zeke Stane on behalf of the Power Elite to carry out numerous terrorist attacks in American soil. They first disrupted a protest between Hydra sympathizers and their oppositors in Washington and opened fire at anyone on sight.[2] They were taken down by the combined efforts of Captain America, the Winter Soldier and Sharon Carter.[3]

After carrying out other several attacks in different parts of the country, the Nuke clones targeted the site of the World Conference of Mayors in Chicago. After setting the building on fire, they were intercepted and defeated by Captain America before any fatalities could ensue.[4] With Black Panther's help, Captain America located the lab producing the Nukes, hidden beneath the mines of a small town. Wakanan intelligence had determined that the Nukes burned out a few days after activation. When Captain America, Black Panther and Okoye raided the laboratory, they located the central command unit and uploaded a virus concocted by Black Panther which reduced the burnout time from days to seconds, killing the dozens of Nukes on standby, as well as hundreds in stasis.[1]

Retrieved from "https://marvel.fandom.com/wiki/Nuke_Clones_(Earth-616)?oldid=5276255"
Community content is available under CC-BY-SA unless otherwise noted.