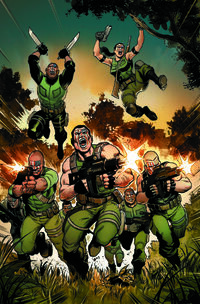 Base of Operations
Santo Marco
Affiliations

The Nuke Platoon originated from the American soldiers sent to Santo Marco that failed their mission to assassinate dictator Emilio Duarte and ended up captured instead. After getting his hands on the technology to produce Nuke Pills,[2] President Duarte got these soldiers to work for him, transforming them into the Nuke Platoon,[1] with which he declared war on the mutant population of his country.[2]

An inhabitant of one of the villages ravaged by the Nuke Platoon, Acero, sought help from Weapon X. This group of mutants liberated the innocents captured and scheduled for execution and confronted the Nuke Platoon at their base. While being cornered by soldiers, Sabretooth stumbled upon the pills factory, and a cell holding the original Nuke, who hadn't bent to Duarte.[2] Sabretooth liberated Nuke and provided him with pills to face the rest of the patrol. However, Nuke soon turned against Weapon X due to his schizophrenia making him believe the mutants were after his pills as well, and even joined forces with Duarte's soldiers.[1]

Weapon X managed to hold the line against the Nuke Platoon by taking some pills themselves, and were even assisted by the mutant villagers they had liberated. Close to the battle's end, Logan used explosives to destroy the supply of pills, and Warpath made Nuke come back to his senses. The surviving members of the Nuke Platoon were subdued, and forced to march on the streets of Santo Marco with the mutant villagers as they challenged Duarte's reign.[3]

Retrieved from "https://marvel.fandom.com/wiki/Nuke_Platoon_(Earth-616)?oldid=5549333"
Community content is available under CC-BY-SA unless otherwise noted.