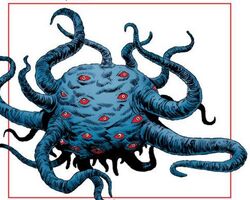 Null is a demonic entity created from the collective negative impulses of a seemingly impossibly benign (and now extinct) angelic race called the S'raphh who once lived on Earth's Moon. After achieving full consciousness, it dominated the town of Christiansboro, Virginia until driven off by the Gargoyle.[2] It subsequently possessed the body of Adam Henderson, using him as a pawn, but was defeated again, this time by the Ghost Rider.[3] Somehow, Null then managed to travel to Earth-712 where it took over the United States with the assistance of the Over-Mind but was driven off and seemingly destroyed by the Defenders and the Squadron Supreme.[4]

As a being of hatred, Null is weakened by goodness and can be overwhelmed if exposed to a massive amount of goodness.[5]

Like this? Let us know!
Retrieved from "https://marvel.fandom.com/wiki/Null_the_Living_Darkness_(Earth-616)?oldid=5436719"
Community content is available under CC-BY-SA unless otherwise noted.