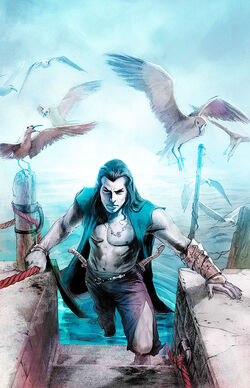 Numenor was the Emperor of Bensaylum, a "city of the gods" beyond the edge of the world. In his first appearance, he was arguing with his cousin Rita (cousin) about her reluctance to marry. She suggested that this was because he refused to find a consort himself. Upon meeting the Four from the Fantastick, however, he was attracted to Susan Storm, and attempted to woo her, unsuccesfully. He later plotted with Otto von Doom to win her (utlizing Sandman's powers to make her pliable to his desires), while "disposing" of Sir Richard Reed. However, this plan failed and Doom turned against him, and Numenor was stabbed with his own trident and died.

Numenor can lift thousands of tons

Like this? Let us know!
Retrieved from "https://marvel.fandom.com/wiki/Numenor_(Earth-311)?oldid=6479544"
Community content is available under CC-BY-SA unless otherwise noted.