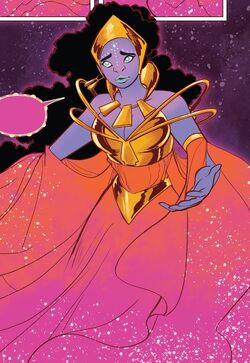 Little is known about the entity known as Numinus, the self-proclaimed guiding spirit of the Universe. The first recorded manifestation of Numinus to humans was to the pre-adolescent group of super heroes known as Power Pack. Numinus appeared before the group as they returned to Earth from the destroyed planet, Kymellia. The entity convinced the team to return to the space station which housed the technocratic society of the planet's survivors. Power Pack arrived at the space station in time to save the Kymellians from an attack by the former Queen Mother Maraud, former Queen Mother of the war-like world of Zz'nrk. The true purpose or design of Numinus in this and similar acts of apparent benevolence remain unclear.[2]

Later, Numinus met Groot while having an exisential crisis about whether the universe was too broken to be worth believing in. Groot argued that there was still enough good in the universe to make it worth fighting for. Convinced, Numinus agreed to go with Groot in order to rescue Rocket Raccoon from the bounty hunter Eris.[3]

Numinus possesses the cosmic power beyond the abilities of humans to measure. She is able to tap into the vast energy of the universe for an incalculable number of effects. Some of her most rudimentary abilities include the ability to manifest an impenetrable energy field around herself or others.

She cannot always control what the effect of her probability manipulation powers will be.[4]

Like this? Let us know!
Retrieved from "https://marvel.fandom.com/wiki/Numinus_(Earth-616)?oldid=5875263"
Community content is available under CC-BY-SA unless otherwise noted.