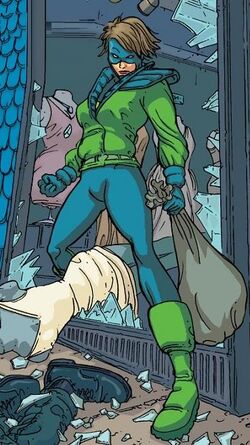 In the People's Republic of China, the government had developed a satellite relay network. The system operated in a very similar manner to the X-Men's mutant detection device, Cerebro. One of the scientific minds who helped to create the new Chinese mutant tracking network was Nuwa. However, Nuwa was herself a mutant, and she eventually decided to use her skills and abilities for the benefit of other Chinese mutants. So she turned rogue, helped to form 3Peace and would often come up against members of China Force; China's mutant powered police force.

3Peace met in secret, but were discovered by Snake, the field leader of China Force. Before the fight had a chance to begin, Snake was struck down by a mysterious stranger who revealed himself to be Reignfire. His offer was simple, in exchange for helping 3-Peace to gather information on the location of Chinese mutants, they would in turn help the Mutant Liberation Front.

In their first mission together, Nuwa was teamed up with Feral. They were meant to enter a satellite tracking facility outside of Shanghai as stealthily as possible. However, Feral murdered the first two guards that they found. Nuwa was clearly unsettled by the swift barbaric approach, and therefore disabled the remaining facility staff using her own mutant powers to send them to sleep. The mission was personal to Nuwa, as they were going to use the same mutant tracking satellite relay network that she had created. On one hand, knowing the technology made it easier for her to create the software needed to hide their own mutagenic signatures from the tracking relay. On the other hand, the situation soon spiralled out of control. As well as Feral's unnecessary use of violence, China Force appeared. Although the Mutant Liberation Front and 3-Peace had China Force outnumbered, Reignfire sacrificed Rabbit as a demonstration of his power and to keep any dissidents in his team under control. Upon returning to the Mutant Liberation Front's base on the Ani-mator's island, Nuwa was clearly expressed her concern of deadly force. Although she stayed with the other members of 3-Peace to set her mind at rest, Moonstar observed at how they were idealistic to the point that they were oblivious to the danger they had put themselves in.

Despite the deadly approach to the first mission, Nuwa had successfully achieved what was needed: the information gathered from the satellite relay was used to locate the so-called Citizen's Rehabilitation Centre near Shanghai. Despite the name, it was clearly a prison for Chinese citizens who had developed the mutant gene in their DNA. The two groups continued to enter prison with ease and eventually they reached the higher security areas which were meant to hold the prisoners. However, it was a trap; instead of imprisoned Chinese mutants, the remaining three members China Force were waiting with a heavily armed guard. Reignfire had betrayed 3-Peace and Nuwa realised quickly that they had been used to help Reignfire barter his terms with the government. Using her power to send the guards to sleep, 3-Peace made their escape. Although they faced Feral and Dani Moonstar outside the complex, Feral was soon sent to sleep, and Moonstar let them go.[2]

3-Peace eventually disbanded and the three members went their own different ways.

Nuwa had not been seen until she randomly turned up in San Francisco, still wearing her 3-Peace uniform. There she accidentally interrupted Boom-Boom's shopping spree. For some unknown reason she had terrorised the local stores and begun to use her powers to take clothes without paying for them. Nuwa had the element of surprise over Boom-Boom, and defeated her with ease by sending her to sleep. Unlike her previous encounter with the Mutant Liberation Front, Nuwa was no longer vocal or conscientious. As she sent Boom-Boom to sleep, the only thing she had to say was her own name.

To Boom-Boom this was a puzzle, and she couldn't understand what the cryptic clue 'Nuwa' meant. It was only with some inspiration from Beast that she did some research on the internet. She searched on various different spellings to find Nuwa, and eventually found her FaceSpace profile page. There Boom-Boom could see that Nuwa had more 'friends' on line, and was able to study what her mutant abilities were. Being prepared, Boom-Boom went out to search for Nuwa again. In a display of over-confidence, Nuwa attempted to send Boom-Boom to sleep for a second time, and was fooled into thinking she had. However, Boom-Boom had dozed herself with copious amounts of coffee, so all the caffeine would keep her awake. Thus enabling her to stay alert and able to time-bomb Nuwa.[1]

Nuwa has not been seen since. It has not been revealed what has caused such a drastic change in personality or morality.

Sleep/Sedation Inducement: On the surface it appears that Nuwa's mutant powers induce sleep. She calls it a "Tranquility Wave", when describing it in lay-man's terms to Feral. Yet on a finer level, she actually turns a target against him or herself, causing a biomolecular feedback in them. She temporarily shorts out their senses, causing them to fall into a peaceful slumber.

It is psionic in nature, and she does not need to make any physical contact with her target. It is unclear whether there is a physical range or maximum distance of which she can affect people. So far, she has been seen affecting a whole room of people at the same time. Whether she could affect people in other rooms that she cannot see has yet to be demonstrated. She could manage to single out her enemies, while leaving her team-mates unaffected.

Nuwa's sleep inducing abilities are strong enough to affect mutants and humans alike, including individuals who have received training to shield themselves from an average psychic attack. However, she has not been in combat against other mutants with psionic abilities, and it is likely that a telepath and other psionic using individuals would be either unaffected or at least difficult for her to defeat.

Although her power is a psychic based ability, it is evident when she uses it as her eyes become blank and begin to emit a bright green glow.

Her powers don not work against people who have ingested sufficient quantities of stimulants, such as caffeine.

Like this? Let us know!
Retrieved from "https://marvel.fandom.com/wiki/Nuwa_(Earth-616)?oldid=5409322"
Community content is available under CC-BY-SA unless otherwise noted.