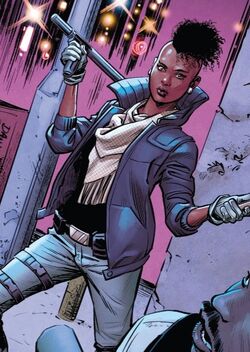 Nyla Skin was a homeless girl who burgled houses to survived. One day she befriended Matt Murdock, during a period in which he was suffering amnesia and was going by the name "Jack." She offered him hospitality at her place, which was a partially-destroyed building. She also proposed him to go burgling together, which he accepted.[1] When entering a house, they were able to use Jack's strange ability to enter unnoticed and open the safe, but Jack refused to take the money, and left empty-handed.[2]

When Jack began fighting in boxing matches, she supported him and developed romantic feelings for him. However, upon finding out that Jack couldn't see colours she became distraught that he didn't know that she was black.[3] She also became jealous of Jack's dreams since he found them important, but reassured her that he still loved her.[4] After accompanying Jack to his next fight, Nyla was kidnapped by Bullseye impersonating Daredevil, who brought her to Kingpin. After Jack remembered his life as Matt Murdock, he was able to rescue Nyla. Refusing to drag her to his world of danger, he left her behind.[5]

While planning to rob a bank truck in Las Vegas, Nyla came across Conan who was robbing the same vehicle. She helped him and invited him to her place. She proposed him to steal a ring, which used belong to her friend Max, and a collection of emeralds from Imus Champion. Upon entering Hotel Inferno, they took care of the guards, but the Black Cat had already come first.[6] While she left with the treasure, Nyla was able to throw a tracer at her helicopter. Nyla and Conan went after the helicopter, while being pursued by Champion's guards. They lost the guards after making their cars crash with each other, and they were confronted by the Scarlet Spider. They successfully knocked him out and reached Black Cat's location. They were attacked by Black Cat's ally, Boris Korpse, but Conan was able to get through his attacks and defeated him. When Black Cat was about to leave, Conan got hold of her helicopter. Black Cat kicked him out, unaware that the treasure also fell out of the helicopter. When Nyla got hold of the ring, she and Conan were transported to Wakanda.[7]

While in Wakanda, Conan fell under the control of the ring and forced him to go inside a cave. Conan was able to destroy the ring, but the duo decided to go to inside the cave anyway. However, Black Panther and the Hatut Zeraze noticed them and demanded to know what they were doing. They briefly battled, but after discovering a shrine dedicated to Set which housed the Serpent Scepter. Then Imus Champion arrived by using his teleporting suit and steal the scepter before teleporting away. After explaining to the Wakandans everything that happened to them, Black Panther agreed to help them.[8] After being escorted to the surface of Atlantis by Princess Shuri, Nyla and Conan took the Genus Formula to breathe underwater and went to the temple of Set which housed the Serpent Crown and was guarded by the Atlanteans. However, Imus got there before them and used the Crown to make Conan and Namor fight each other. Nyla tried to fight Imus, but it was all in vain as Imus got hold of both Conan and Nyla thanks to the combined power of the crown and the scepter.[9]

They were transported back at Hotel Inferno where Imus decided he didn't Mephisto anymore and instead keep the powers of the artifacts for himself. However, the artifacts' powers began overwhelming Imus, allowing Conan to tackle him. While Conan fought Imus, Nyla took care of Imus' guards, but then Mephisto arrived and took Conan's spirit to talk. After Conan returned to his body, Mephisto tampered with the serpent artifacts resulting in the apparent destruction of Imus and the artifacts. After that, Conan and Nyla decided to celebrate their victory at the Bellagio casino.[10]

Partial Deafness: Because she listened too much Rock 'n' Roll, Nyla's hearing ability was significantly decreased.[1]

Like this? Let us know!
Retrieved from "https://marvel.fandom.com/wiki/Nyla_Skin_(Earth-616)?oldid=6031224"
Community content is available under CC-BY-SA unless otherwise noted.