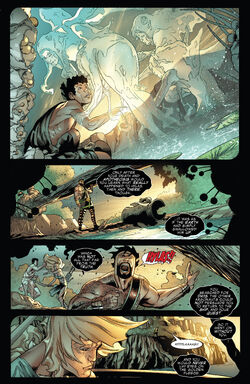 Nymphs were humanoid creatures hailing from the Olympian realm and ancient Greece, among other places. They were divine spirits similar to Fairies, being capable of animating the nature, and usually appeared as young women. They lived in mountains, forests and various bodies of water; and were virtually immortal.[citation needed] Nymphs were the frequent target of Satyrs.[citation needed]

The Nymphs can be broken down into other sub-groups:

Some of the Nymphs, such as the Water Nymphs, are considered elementals.[13]

Achelous and the divine muse of dance Terpsichore sired the Sirens, who lived on the Sirenum scopuli islands.[9]

During the Pre-Cataclysmic Age, Water Nymphs lived (at least) near Kamula in Valusia, and in Thule. One such tried to have Kull slain.[13]

During the Hyborian Age, the Water Nymph Miri was enslaved by Kezan Val, who bound her to lure a score of ships onto the rocks with her Siren call. She helped Conan challenge him for the leadership of the Western Corsairs and was freed by the Cimmerian. She later repaid the debt by shipwrecking the Argossean Man of War led by King Thamos.[14]
It is unknown if Miri was a Siren, or if the Siren call was a power also possessed by Water Nymph.

Amphitrite was the wife of Poseidon.[citation needed]

Penelope was the name of a beautiful young Nymph and the lover of Hermes. She was horrified when she saw her son who was the Satyr, Pan.[citation needed]

Scylla was a beautiful Naiad who was claimed by Poseidon, and turned into a monster when the jealous Amphitrite poisoned the water of the spring where she bathed.[15]

A Nereid, Thetis was a sea-goddess[16] and the daughter of the sea-god Nereus.[17] Along with fellow Nereid Eurynome adopted and raised Hephaestus.[5] She later wed Peleus and gave birth to seven son, including Achilles.[16]

Ekho, a Nymph whose constant chattiness earned her the ire of the goddess Hera, was cursed by the goddess to only speak last, and only repeating the last word spoken to her, so that she would never speak first. Filled with grief, Ekho faded from physical form and remained a disembodied voice.[18]

On the Quest for the Golden Fleece, the Argonauts landed on the island of Mysia, where Hylas went to collect water and ended up being seduced by some water Nymphs. The beautiful creatures dragged the boy into their pond and he was never seen again. Hercules searched him for days, but the Argonauts were forced to leave their friend on the island to hunt for their missing friend.[20]

In the modern era, Ireland-based Dyke claimed to be the last of the Nereids.[6]

The Nymphs possess many powers:

The Water Nymphs had no power over people they could not seduce, such as Kull or Bakas.[13]

Like this? Let us know!
Retrieved from "https://marvel.fandom.com/wiki/Nymphs?oldid=7042160"
Community content is available under CC-BY-SA unless otherwise noted.