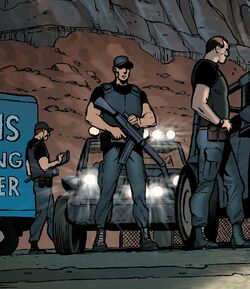 Oasis Spring Water was the company responsible for Sweet Medicine Indian Reservation's fall into poverty by taking posession of an underground water reservoir located in tribal land. They elaborated a ruse that involved toxic waste leak and the contamination of Sweet Medicine's only known underground spring, which diverted attention from the water pumping station in the newfound reservoir, which was also hidden within an alleged hazard zone to prevent any unwanted visitors.[1]

When the Hawkeye decided to investigate Swet Medicine's water problem, he delved into the reservation, catching the attention of the armed militia protecting the pumping station.[2] Hawkeye's confrontation against the militia and his subsequent apprehension together with his ally Red Wolf by the hand of hired goon Hydro-Man caught the attention of two of the reservation's inhabitants, Silas and Frank Fireheart, who followed the militia as they took the heroes to the pumping station.

Oasis' boss tried to interrogate Hawkeye and Red Wolf, but they managed to untie themselves. Red Wolf took down most of Oasis' armed militia while Hawkeye confronted Hydro-Man. The heroes were assisted Fireheart counsins, and together they finished off the militia and Hydro-Man, who was knocked out after being electrocuted by Silas. The authorities were notified, and Oasis Spring Water was dealt with accordingly.[1]

Retrieved from "https://marvel.fandom.com/wiki/Oasis_Spring_Water_(Earth-616)?oldid=3968390"
Community content is available under CC-BY-SA unless otherwise noted.