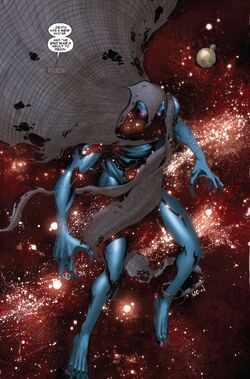 Gallery
Real Name
Oblivion
Aliases
The Darkness,[1] The Void,[2] the End of Creation,[2] The Nothing Which Watched the Birth of Everything,[2] the breath between life and death, the nothing from which the everything springs[citation needed]
Relatives

Now don't think badly of me: I can't help but wish for the end of all things. It's in my nature, my very identity, for my name...to some, at least -- is Oblivion. Before creation was... I was. Where creation ends... I wait. I am the void. The breath between life and death. Between death and rebirth. The nothing -- from which the everything springs.

Oblivion is a cosmic abstract entity and another aspect of Death, a personification of death. Oblivion predates the Multiverse,[5] and represents non-existence and is a counter-force to the expanding universe.[6]

Oblivion is a cosmic entity embodying the primordial void that existed before the creation of the universe. Despite predating the Multiverse itself,[5] it sees its fellow cosmic entities Eternity, Infinity and Death - who came into being when the universe was created - as siblings. Another being, known as Galactus, was born later, from the ashes of the previous universe and is also seen as a sibling by these beings. Oblivion has a very close relationship with Death and the two may be different aspects of the same being, just as Infinity and Eternity are. Just like Eternity and Death have a strong rivalry, Oblivion has a strong rivalry with Infinity, a rivalry usually fought through avatars. Oblivion usually resides inside a pocket dimension, known as the Outer Void.[6]

Two of Oblivion's principle avatars are the Chaos King and Knull, who originated from the primordial Void before the universe began.[4][7][1] While the Chaos King integrated into the Amatsu-Kami and became known as Amatsu-Mikaboshi,[8] Knull created the symbiotes and other eldritch monsters from living darkness and waged war against the universe to return it to the Void.[9]

Annihilus, lord of the Negative Zone, was allegedly the first born-born son of Oblivion.[3] Oblivion also had a daughter, the being known as Mirage, who assumed the human form of Marge Smith. As Marge Smith, Mirage tried to turn Iceman against her father. In return, Oblivion used three aliens known as White Light, the Idiot and Kali to attack his daughter. He also tried to turn Iceman against Mirage, but in the end Iceman convinced the two to settle their differences peacefully.[10]

In his rivalry with Infinity, Oblivion empowered Maelstrom as his avatar and sent him his agent, Deathurge to assist him. As Oblivion's agent, Maelstrom tried to destroy the whole universe, but he was stopped by Quasar, the avatar of Infinity. Oblivion, Infinity, Death, and Eternity then came to a new agreement.[11]

Maelstrom returned to life later and came into conflict with the Great Lakes Avengers. During this conflict, Deathurge was sent repeatedly to collect the souls of Great Lakes Avengers who died. When he tried to claim the soul of Squirrel Girl's sidekick Monkey Joe, Mr. Immortal used the opportunity to grab Deathurge, now just the size and shape of a squirrel, and defeat him. The recently deceased Doorman encountered Oblivion, who made him his new agent, telling him that Deathurge had failed him.[12] At Christmas, Deathurge tried to regain his position, but failed the test Oblivion gave him.[13]

Oblivion is a cosmic and also a virtually omnipotent entity representing the inevitable ending of all things, oblivion itself. He can manifest anywhere he wishes, and cannot be affected by the mortal plane if it doesn't suit him. Oblivion can empower agents or avatars with different amounts of power to act in his name.

Like this? Let us know!
Retrieved from "https://marvel.fandom.com/wiki/Oblivion_(Earth-616)?oldid=6472311"
Community content is available under CC-BY-SA unless otherwise noted.