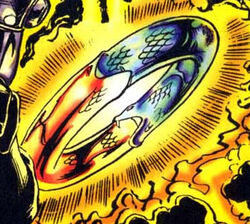 The location of the Oculus was concealed via a spell. This spell was inadvertently disrupted by researchers.[citation needed]

Posing as Doctor Doom; Nathaniel Richards) sent Latverian forces to take the Oculus, but were confronted to Strange.[1]

The Oculus acts as a conduit for elemental magic.[citation needed]

On the Battleworld, Oculus' were components in the amulets used by the Temple of Vishanti.[2]

Like this? Let us know!
Retrieved from "https://marvel.fandom.com/wiki/Oculus_Oroboros?oldid=6443432"
Community content is available under CC-BY-SA unless otherwise noted.