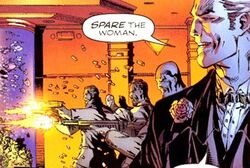 The Odessa Mafia was a crime family operating in Las Vegas. After killing a federal witness, they were targeted by Kaylie, his daughter who merged with the Witchblade to avenge him. Unfortunately, she couldn't control the Witchblade and joined the Odessa Mafia instead. She tried to give the Witchblade's former wielder, Sara Pezzini, and her former mentor, Wolverine, a better life through amnesia, these actions were actually Odessa Mafia manipulations to help their expansion into New York. When their amnesia wore off, Odessa Mafia tried their backup plan and attempted to kill them, only for Logan and Sara to free Kaylie and kill the rest of the mafia.[1]

Retrieved from "https://marvel.fandom.com/wiki/Odessa_Mafia_(Earth-7642)?oldid=5811222"
Community content is available under CC-BY-SA unless otherwise noted.