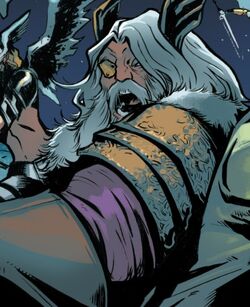 Odin took part on the second "Angels War", fighting side to side with Loki against the Angels of Heven.

Ten years later, he was seen ruling over Asgardia alongside his wife Freyja and his brother Cul.[2]

Eventually, old age took its toll on Odin, causing his mind to go. Thor was forced to kill his father to end his suffering.[3] After his death,[4] Thor became the new All-Father.[5]

Like this? Let us know!
Retrieved from "https://marvel.fandom.com/wiki/Odin_Borson_(Earth-14412)?oldid=5893420"
Community content is available under CC-BY-SA unless otherwise noted.