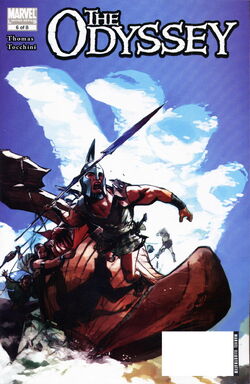 After the Trojan War, Odysseus made a ten year journey accross the Mediterranean Sea to reach his home, Ithaca; his adventures were recounted in the epic "Odyssey".[1]

On his way home, storms led Odysseus' ships to the Hidden Isle the home of the Cyclops; Polyphemus, who started eating the crew of the ships. Odysseus managed to trick Polyphemus and along with his companions, blinded the Cyclops. Before they left, though, he did the mistake of revealing his identity to Polyphemus, who then told his father, the god Poseidon; this had a major impact on the hero's travel, as the god sent rough seas throughout the journey.[2][3][1]

The ships then reached the island of the god of winds, Aeolus, who put all winds except the west wind in a bag and gave the bag to Odysseus. As a result, the west wind blew the ships all the way to Ithaca. However, just before they reached the shore, Odysseus' companions took the bag of winds from Odysseus, and thinking it contained gold, opened it and released all of the winds. The ships were blown away from the island, back to where they had started. Aeolus did not accept to help them again, and they left.[1]

They went to the island of the Laestrygonians, a cannibalistic tribe that ate all of the crew, except that of Odysseus' ship, they quickly left the island.[1]

They next reached the island that of the witch Circe. She turned Odysseus' companions into pigs, but Odysseus, who had been given a magical herb by Hermes, resisted her witchcraft. Circe fell in love with Odysseus and transformed the pigs back into men. After they stayed on the island for one year, they left to continue their voyage.[4]

He braved the terrors of Hades, the Underworld with them, and while in the land of the dead Hades allowed Teiresias, Odysseus' mother, Ajax and others to give him advice on his next journey. With this newly acquired knowledge, he steered them past the perils of the Sirens and of Scylla and Charybdis He could not save them from their final folly, however, when they violated divine commandments by slaughtering and eating the cattle of the sun-god. As a result of this rash act, Odysseus' ship was destroyed by a thunderbolt, and only Odysseus himself survived. He came ashore on the island of the nymph Calypso, who made him her lover and refused to let him leave for seven years. When Zeus finally intervened, Odysseus sailed away on a small boat, only to be shipwrecked by another storm. He swam ashore on the island of the Phaeacians, where he was magnificently entertained and then, at long last, escorted home to Ithaca.[1]

There were problems in Ithaca as well, however. During Odysseus' twenty-year absence, his wife, Penelope, had remained faithful to him, but she was under enormous pressure to remarry. A whole host of suitors were occupying her palace, drinking and eating and behaving insolently to Penelope and her son, Telemachus. Odysseus arrived at the palace, disguised as a ragged beggar, and observed their behavior and his wife's fidelity. With the help of Telemachus and Laertes, he slaughtered the suitors and cleansed the palace. He then had to fight one final battle, against the outraged relatives of the men he had slain; Athena intervened to settle this battle, however, and peace was restored.[1]

Retrieved from "https://marvel.fandom.com/wiki/Odyssey?oldid=5766418"
Community content is available under CC-BY-SA unless otherwise noted.