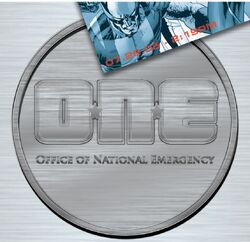 The Office of National Emergency or O*N*E was created by the Presidents of the United States of America upon releasing Executive Order 13361 of November 16, 2004.[2] The Office was headquartered at the Pentagon, in Washington, D.C.[3]

Upon the M-Day, an event that caused a massive depoweration of the mutant population, the President had the O*N*E go active.[3] He also released Executive Order 13386 of November 2, 2005, providing all extant intelligence on the remaining mutants, compiled and evualated by the Commission on Superhuman Activities (C.S.A.) in cooperation with S.H.I.E.L.D., as well as ordering Sentinel Squad O*N*E to active duty.[2]

The Xavier Institute had Sentinel Squad O*N*E and a number of conventional troops stationed around it. Valerie Cooper, an adviser and deputy director on the program, was sent to explain their mission to the X-Men.[citation needed]

Known remaining mutants have been assessed on their potential threat levels by the organization. Many government officials still fear that a human-mutant conflict will escalate to massive global warfare.[citation needed]

In light of General Lazer's actions, Valerie Cooper was promoted to director of the organization.[citation needed]

Val Cooper's O*N*E remained a client of X-Factor under Havok's and Polaris' leadership. When a community of anti-mutant terrorists (including children) sent threatening letters to the President, the O*N*E stepped in and brought X-Factor along. Though the terrorists almost successully set a bomb in the camp, the operation was a success.[31]

Retrieved from "https://marvel.fandom.com/wiki/Office_of_National_Emergency_(Earth-616)?oldid=5678910"
Community content is available under CC-BY-SA unless otherwise noted.