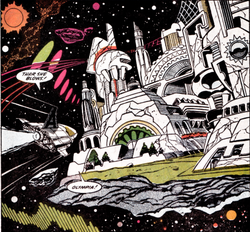 Olympia is the home of the Eternals from Earth. The Eternals' ancestral home was originally the city of Titanos.

At one time, the city of Olympia was sucked into the Negative Zone.[2]

Like this? Let us know!
Retrieved from "https://marvel.fandom.com/wiki/Olympia?oldid=6510849"
Community content is available under CC-BY-SA unless otherwise noted.