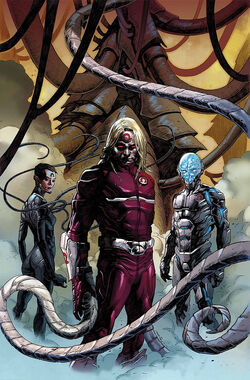 A secret organization known as the White Sky were hired by Daken's Brotherhood of Evil Mutants to create clones based on the genetics of Omega Red.

These clones were known as Omega Red, Omega Black and Omega White. Each of these clones have different abilities from each other. They were programmed to hate X-Force and believed that they killed their parents.[2]

As X-Force infiltrates the White Sky's base, the Omega Clans ambushed them. Eventually, X-Force escape from their grasp. X-Force later retreated back to their base in Cavern-X. After the death Fantomex, his control over Ultimaton returns to its natural programming "Killing Mutants" where their base was nuked. The new Brotherhood and Omega Clan watch on, with Genesis under Daken's arm, and Fantomex dead in a chair.

During the last confrontation between the Brotherhood and X-Force, Omega Black and Omega Red were seemingly killed by Evan, while Omega White was mind-wiped, and his body was used as a prison for the Shadow King.[3]

The Omega Clan was eventually invited to the new mutant island of Krakoa, created by Xavier, Magneto, and Moira X in order to heal mutantdom and start over as a whole species together.[4]

Ironically, their color scheme bears a resemblance to the flag of the National Bolshevik Party.

Retrieved from "https://marvel.fandom.com/wiki/Omega_Clan_(Earth-616)?oldid=5549364"
Community content is available under CC-BY-SA unless otherwise noted.