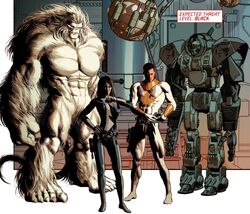 Origin
Formed by the Canadian government to stop the influx of super-villains escaping the American Superhuman Registration Act.

When the Superhuman Registration Act became law, various villains and unregistered heroes began to cross into the Canada to escape the SHRA. This situation had caused a problem for the Canadian government due to Alpha Flight demise. Iron Man agreed to help the Canadian government by sending a group of registered heroes to Canada. Sasquatch and Talisman teamed up with Arachne, Beta Ray Bill, Guardian (Michael Pointer, formerly known as the Collective), and US Agent to form the new Omega Flight in order to fight a horde of demons, a Tanaraq possessed Sasquatch, and the Wrecking Crew. During the battle that followed Beta Ray Bill tricked the demon hordes to follow him into a dimensional portal, once inside the portal Guardian destroyed it trapping Beta Ray Bill and the demons in another dimension. Despite Bill sacrificing himself, Omega Flight still remained together.[1]

Three days before the discovery of the Skrull Invasion, Pointer went at Cape Columbia to try to recruit Snowbird, in vain as she despised him for having cause Alpha Flight's death as the Collective (including Shaman who had raised her like a father), wearing James Hudson's uniform and asking her to join a team named after Alpha Flight's enemies.[2]

A new incarnation of Omega Flight was later assembled by the Department H during the aftermath of the Avengers vs. X-Men conflict. It consisted of Validator, Boxx, Kingdom, and a Wendigo. Omega Flight was sent in by Department H to investigate one of the spots left by Ex Nihilo in Regina, Canada. With the exception of Validator, all members of the team were killed in action by the hostile organisms.[3]

Retrieved from "https://marvel.fandom.com/wiki/Omega_Flight_(Heroes)_(Earth-616)?oldid=5549370"
Community content is available under CC-BY-SA unless otherwise noted.