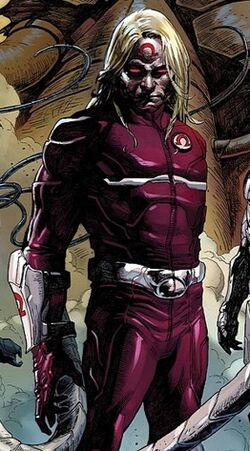 Omega Red was built from the remains of the original Omega Red by an organization called the White Sky. He, along with his "siblings", was implanted with false memories that result in a strong grudge against X-Force who, as they believe, was hired by some pharmaceutical company to kill their father who discovered a cure for their autoimmune diseases.

During the final confrontation between the Brotherhood and X-Force, Omega Red was killed, seemingly by Evan Sabahnur.[1]

Omega Red was revealed to have survived, and started a mercenary career, working for Roxxon.[2] When he clashed with Deadpool, he tried to have revenge on him for the false memories implanted on him.[3]

After fighting Deadpool several times, the mercenary convinced him that the memories of his past were false and that just like him, Omega Red needed to realize he wouldn't be controlled by those who transformed them into monsters. Both called a truce, and Omega Red agreed to leave Deadpool alone unless he discovered he had actually murdered his family.[4]

Somehow Omega Red was killed and was later resurrected by Persephone, the mysterious leader of the company Soteira as one of her undead soldier.[5] The reanimated corpse of Omega Red was assigned to guard one of the company's bases in an unknown location. When the base had to be evacuated and certain people had to be killed, the undead Omega Red was used in order to brutally kill those that tried to run away. Later, the undead Omega Red was shot down by Wolverine after witnessing it brutally killing a scientist but it quickly recovered and temporarily knocked Wolverine out by shooting out the motorcycle he was riding.[6]

The undead Omega Red later accompanied other Soteira enforcers on a boat but was chased after by Wolverine and former Soteira employee Ana (who was in reality already dead and merely used as a vessel by Persephone) who were chasing them to get back Ana's son Perren. The reanimated corpse of Omega Red and the reanimated corpse of Wolverine's son Daken confronted Wolverine, but the undead Omega Red was defeated by Ana who shot a harpoon into its head while Wolverine took out the undead Daken.[7]

Omega Red was later resurrected by unknown means and alongside the rest of the Omega Clan he was invited to the new mutant island of Krakoa, created by Xavier, Magneto, and Moira X in order to heal mutantdom and start over as a whole species together.[8]

Disease Release: Using his tendrils, he can affect people with such disease as autoimmune disease and his own form of super lupus.[9]

Superhuman Durability: He as show to be incredibly durable having not only withstood gun fire and explosions but survived having Queen Shiklah punch her fist through his chest and still walked away.[3][4]

Superhuman Agility: Omega Red's natural agility, body coordination, and balance are enhanced to levels that are beyond the natural physical limits of the finest human athlete. [citation needed]

Superhuman Reflexes: Omega Red's reflexes are similarly enhanced and are superior to those of the finest human athlete.[3]

Like this? Let us know!
Retrieved from "https://marvel.fandom.com/wiki/Omega_Red_(Omega_Clan)_(Earth-616)?oldid=6475018"
Community content is available under CC-BY-SA unless otherwise noted.