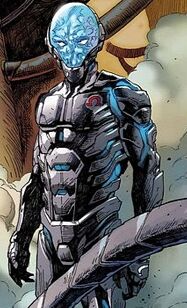 Omega White was built from the remains of the original Omega Red by an organization called the White Sky.[2] He, along with his "siblings", was implanted with false memories that resulted in a strong grudge against X-Force who, they believed, was hired by a pharmaceutical company to kill their father who had discovered a cure for autoimmune diseases.[3]

During the last confrontation between X-Force and the Brotherhood, Omega White tried to avenge his "brother" Omega Red. Psylocke mind-controlled him in order to absorb the Shadow King's, and then erased Omega White's mind, leaving the Shadow King trapped in a vegetative corpse.

This "prison" was seemingly kept in custody of X-Force, brought in E.V.A..[1]

Omega White seemingly had his mind fully restored through unknown means after the Shadow King left his body and, alongside the rest of the Omega Clan, was eventually invited to the new mutant island of Krakoa, created by Xavier, Magneto, and Moira X in order to heal mutantdom and start over as a whole species together.[4]

Like this? Let us know!
Retrieved from "https://marvel.fandom.com/wiki/Omega_White_(Earth-616)?oldid=5380086"
Community content is available under CC-BY-SA unless otherwise noted.