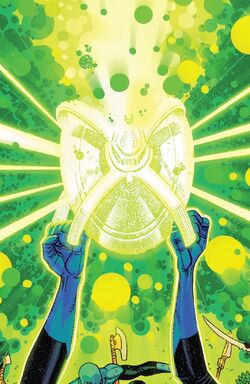 The Omni-Wave Projector is a Kree device which can enable communication across hyperspace as well as be used in an offensive capacity as a weapon by non-Kree races.

As the Avengers were battling the Skrulls in King's Crossing, an unguarded Captain Marvel escaped and engineered an Omni-Wave Projector in order to get a report to the Kree that the Skrulls were on Earth. Carol Danvers then revealed herself to be the Super-Skrull in disguise, and what he wanted was a working Omni-Wave Projector. Although Captain Marvel destroyed the device before Super-Skrull could examine it, he was abducted along with Quicksilver and the Scarlet Witch.[2]

Returning to the Andromeda Galaxy, the Super-Skrull, as an unwanted exile, was subdued by Emperor Dorrek VII’s forces, and the prisoners transferred into the Emperor’s custody. Dorrek threatened the lives of Quicksilver and the Scarlet Witch, so Captain Marvel agreed to construct an Omni-Wave Projector for him, as a final solution to end the Kree/Skrull War.[3]

During a negotiation with the Avengers, the Skrull Emperor then threatened Earth with a death ray from the Omni-Wave Projector that Captain Marvel was building, but during his speech, he was surprised to discover that Captain Marvel had escaped and freed Quicksilver and the Scarlet Witch.[4]

Much later, Lunella "Moon Girl" Lafayette built a device designed to uncover Kree technology and found an Omni-Wave Projector hidden beneath the Brooklyn Bridge in the Financial District of Manhattan. Elsewhere, long ago in Earth-78411, a New Folk named Thorn-Teeth was also revealed to be in possession of an Omni-Wave Projector they called the Nightstone. When Coach Hrbek accidentally activated Lunella's device, it opened a portal across space and time from Dinosaur World to Earth-616, allowing the Killer-Folk to cross over into present day New York City. Devil Dinosaur followed, looking to avenge the death of his longtime companion Moon-Boy at the hands of Thorn-Teeth's tribe.[1]

Before parting ways with the Mutant Devil-Beast, Moon Girl revealed to Devil Dinosaur that she needed the Omni-Wave Projector because she believed it was the key to protecting her from the cloud of Terrigen Mist circling the planet and would thus prevent her latent Inhuman DNA from forcing change upon her through Terrigenesis; however she was captured by the Killer-Folk, who claimed her Omni-Wave Projector as their own, shortly thereafter.[6] Luckily Devil Dinosaur arrived to rescue Lunella from the Killer-Folk, though they were unable to recover the Omni-Wave Projector, as Gurf took it and dove into the East River.[7]

During the Cotati's invasion of Earth, the Dark Harvest, a secret and deadly sect of the Priests of Pama, abducted the child Kree soldier Jo-Venn from the custody of the Fantastic Four. Jo-Venn's nature as a receptacle of the entire history of his species allowed the Dark Harvest to probe his mind to learn how to build an Omni-Wave Projector.[8] At this time, the Kree and the Skrull empires had joined forces into the Alliance to combat the Cotati. After constructing the Omni-Wave Projector, the Dark Harvest also secured N'Kalla, Jo-Venn's counterpart from the Skrull Empire. The sect then forced both children to beam into the minds of every Kree and Skrull memories of the Kree/Skrull War, which awakened the buried enmity between the two species and risked to tear apart the Alliance. Franklin and Valeria Richards managed to convince Jo-Venn and N'Kalla to focus on their bond that had stemmed from their rivalry, filling the troops of the Alliance with positive feelings for each other, strengthening their union and foiling the Dark Harvest's plan.[9]

Like this? Let us know!
Retrieved from "https://marvel.fandom.com/wiki/Omni-Wave_Projector?oldid=6435713"
Community content is available under CC-BY-SA unless otherwise noted.