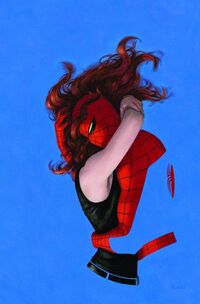 Official Name
One Moment in Time

His personal life in tatters, his loved ones affected, and his identity compromised to the whole world. Peter talks with Mary Jane about asking Doctor Strange to use his magic to restore his secret identity as Spider-Man. However, such an undertaking requires everyone beyond Peter to forget, so he must choose if Mary Jane should also forget him, their history, and the love they shared together. With testimonies from Tony Stark and Reed Richards, Doctor Strange agrees to help Peter regain his secret identity.

Although Strange commences, Peter chooses at the last instance to spare Mary Jane from the spell, despite her want to forget so much of the pain and hurt from the years of being in Spider-Man's life. With this new beginning, Mary Jane and Peter mutually agree to lead separate lives, to heal themselves. Having his secret identity restored, Peter Parker can live freely again while keeping his loved ones safe from Spider-Man's involvement, as both move on to new adventures.

After the events of Spider-Island, the magical blind spot on Peter's returned secret identity is weakened as average citizens saw him using Spider Powers.

Retrieved from "https://marvel.fandom.com/wiki/One_Moment_in_Time?oldid=6847201"
Community content is available under CC-BY-SA unless otherwise noted.