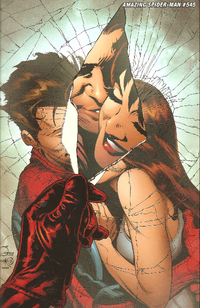 May Parker, is dying from a wound caused by a shot fired by a Kingpin killer, actually intended for her nephew Peter Parker. The latter, now desperate, is forced to ask for help from Tony Stark in order to be able to pay for treatment, despite the fact that their relationship has deteriorated hopelessly after the Civil War. Once Tony gave Peter the money through Jarvis, Peter asks Dr. Strange for a consultation, informing him that he can't do anything to save the woman. Help Peter anyway to contact the greatest minds in the universe at the same time point (Doctor Doom, High Evolutionary, Mister Fantastic, Doctor Octopus, Morbius etc ...) but no one can do anything to save the old lady. At that point Peter tries to go back in time, casting a spell he had seen in the home of Strange, without his consent, but he gets nothing different from hurting himself. The sorcerer heals him and brings him back, encouraging him to surrender and stay close to his aunt in his last days. On the way back to the hospital, he meets a little girl, who claims to have the solution to his problems.

Peter tries to talk to the child, but she runs away. Running after her, Peter meets several men and a woman dressed in red, who informs him that she has just met her alternative versions, from universes in which Peter never became Spider-Man. The woman then turns into Mephisto, who proposes to seal a pact with him, claiming to be the only one able to save May. As payment, Mephisto does not want Peter's soul, but his happiness: marriage with Mary Jane. Mephisto will feed on the desperation that the two will feel for lost love. Despair, however, that will only feel the unconscious level, since they will not remember, either that they have never married, or that they have made the deal. The Demon grants the two until the following midnight to accept his proposal or not.

Peter and Mary Jane accept the pact, after a troubled and painful discussion. Mary Jane then whispers a mysterious offer to Mephisto, in exchange for making the world forget the identity of Spider-Man. The demon consents to the request, but first unveils the identity of the child Peter meets: she is the daughter that the two will never have, never having married. He then cancels their marriage, the memories of it, and makes Spider-Man's identity secret again.

Peter wakes up alone, in the room where he lived as a boy, in the house of Aunt May, who now enjoys good health. The boy, after greeting her, goes to a party, which is also attended by Mary Jane, organized for the return of Harry Osborn from Europe, where all the guests raise their glasses and toast to a new day.[1]

Retrieved from "https://marvel.fandom.com/wiki/One_More_Day?oldid=6152049"
Community content is available under CC-BY-SA unless otherwise noted.