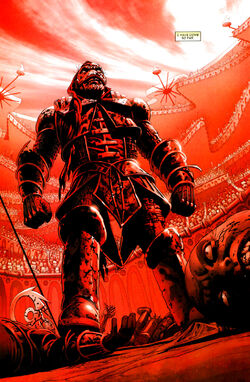 Ord hailed from the Breakworld, a planet home to a warrior culture whose technology allowed them to see partial versions of the future. These "timeshadows" foretold that their planet would be destroyed by a mutant from Earth, most likely a member of the heroic X-Men. For decades, Ord fought and won in many arena-style battles for the honor of being chosen to travel to Earth with a declaration of war. However, the spy agency S.W.O.R.D. (Sentient Worlds Observation and Response Department), a sub-division of S.H.I.E.L.D. that handles extraterrestrial matters, was able to settle with him diplomatically by offering him a chance to eradicate the mutant gene, while they would seek to identify the mutant that would be responsible for the Breakworld's destruction.[2]

In order to fulfill his end of the bargain, Ord secretly replaced the body of Colossus, a former member of the X-Men, with another body, before it was due to be cremated. Using his advanced alien technology, Ord had Colossus restored to life and kept him prisoner for years while experimenting on him. Ultimately, Ord discovered the cure to the Legacy Virus still in Colossus' system and presented his findings to Benetech geneticist Doctor Kavita Rao, who was able to modify it into creating a "cure" for the "mutant condition."[3] As Rao appeared in front of the world media to announce the cure, Ord hoped to flush out the X-Men and staged a hostage situation at a charity gala. True to form, the X-Men arrived to save the hostages and confronted Ord. Making short work of the heroes, Ord was driven off by the timely arrival of the alien dragon Lockheed, ally of the X-Man Shadowcat, who engulfed Ord's head in flame, causing him to flee.[4]

Seeking revenge, Ord stole into the Xavier Institute to find that the X-Men had left to investigate BeneTech. Wanting to leave the X-Men a message, Ord injected the young student Wing with the "cure", removing the boy's powers and instructing him to tell the X-Men that the mutant abomination would never be a threat to the Breakworld.[5] Ord then returned to BeneTech and confronted the X-Men; however, another timely arrival – Colossus, who had been found and freed by Shadowcat – saw him defeated once more.[5] Head of S.H.I.E.L.D. Nick Fury and S.W.O.R.D.'s Special Agent Abigail Brand arrived to defuse the situation, but while explanations were being made, mutants desperate to obtain the cure stormed the facility; allowing Ord to escape in the confusion. Wolverine prevented him from leaving Earth in his spacecraft, and he was taken into custody by S.W.O.R.D.[2]

Later Ord escaped from the Peak, a space station in orbit around the Earth, with the assistance of Danger and attacked the X-Men while they were also fighting Cassandra Nova. Ord and Danger were apparently re-captured along with the X-Men where they were to be sent to the Breakworld. The Breakworld army captured and punished him for his failure.[6]

Ord possesses strength much greater than that of a human and is also capable of flight. It is unclear whether these attributes are shared by all members of his race, or if they are the product of alien technology.

Ord is a formidable hand-to-hand combatant, having decades of fighting experience.

Ord wears a suit of body armor. He also wields a circular weapon with barbed blades that he claims can cut through any substance on Earth.

Like this? Let us know!
Retrieved from "https://marvel.fandom.com/wiki/Ord_(Breakworld)_(Earth-616)?oldid=5734232"
Community content is available under CC-BY-SA unless otherwise noted.