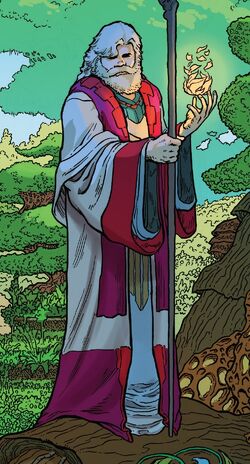 The true origins of Ord Zyonz, like all Elders of the Universe, have been lost in time due to being one of the oldest living beings in the universe. What is known is that he was the last survivor of a race which evolved just after the Big Bang. Because the Elders are each the last surviving members of their respective species, they consider each other to be siblings; often referring to each other as brother or sister. The Elders all have extended lifespans gained through a single-minded obsession with various hobbies. In Ord Zyonz's case, that obsession was gardening and horticulture.[1]

Virtually immortal, the Gardener devoted his life to the creation of natural beauty by sowing the seeds of plants, flowers, and trees upon barren or devastated worlds. The number of worlds he has turned into fertile planet-wide gardens over the eons is countless. He amassed a knowledge of botany second to none and collected billions of different seeds in his travels. Using his advanced cultivation techniques, he could cover a barren Earth-sized planet with lush vegetation in the space of a year.[2] In recent millennia, the Gardener acquired one of the Infinity Gems, then believed a Soul-Gem, an alien artifact that enabled its possessor to manipulate the fabric of time and channel cosmic energy. The Gardener employed it to stimulate the growth of his seeds beyond their normal rate and to traverse space without a starship.[3]

One of the first known uses was when the Gardener used his Gem's power to combat the Stranger, another powerful extraterrestrial possessing an Infinity Gem. Believing that he "corrupted" the gem by its use as a weapon, the Gardener abandoned it.[3] Later, the Gardener replaced his Gem with the one once worn by the golden Earth-being Adam Warlock which had been buried with his body on Counter-Earth.[4] Warlock's frequent employment of the gem as a weapon did not matter to the Gardener as long as he himself had not used it in that way.

When the Hulk traveled to bury Jarella on her home world of K'ai, he was attacked by rocks, plants and monsters. He defeated them all and then faced the Gardener.[5] The Gardener locked the Hulk with branches and changed his persona to Bruce Banner. The Gardener left ordering his beast to attack the K'aitians. Despite the Gardener's formidable power, Hulk defeated him and grabbed the gem from the Gardener's forehead. Hulk threw the gem into the planet's core, turning Jarella's world into a garden once more.[6]

Upon being contacted by the other Elders of the Universe, the Gardener agreed to partake in aggressive activities against the alien being Galactus and then the universe itself in order to recreate reality.[7] The plan was foiled by Galactus' former Herald, Silver Surfer, and his ally, Mantis and the Gardener was converted to energy and consumed by Galactus along with the other four Elders[8], yet they were later forced out of Galactus by Master Order and Lord Chaos who also gave them five of the Infinity Gems, with one going to each of the Elders.[9]

The Gem in possession of the Gardener was revealed to be the Time Gem, but he held it for a time unaware of its true powers and simply using it to cultivate his garden. This was until Thanos of Titan came to bargain for it. The Gardener refused to simply surrender his gem. He bound Thanos in vines, but he broke free and then accelerated the Time Gem using the Power Gem, amplifying the Gardener's plant growing powers causing vines and branches to grow from his body and trapping it in place, which allowed Thanos to simply take the stone.[10]

Later, when the real Contemplator organized the Deadpool Corps to oppose a cosmic threat: the Awareness, the Gardener assisted the Champion in testing their mettle.[11] After being rescued by the Gardener, the Champion tracked down Deadpool at a bar and began to fight, but was eventually convinced to join the team under the name Championpool.[12] He was soon tricked into going to fight on another deserted planet, only to find that there was no warriors to fight and his rocket cycle is without fuel, leaving him stranded.[13]

The Gardener took part in a contest of champions between the Elders of the Universe to decide who would keep the Iso-8 that was now abundant after the rebirth of the Multiverse, his champions lost and he was eliminated from the contest.[14] Not long afterwards, the Gardener was approached by Loki to inquire him about the location of the Soul Stone. Even though the Gardener didn't know its location, Loki poisoned him and drove him mad, making him become paranoid for the desecration of his work by the hand of the advanced societies of the cosmos.[15]

Because of this, the Gardener attacked one of the last Flora colossi, the Guardian of the Galaxy Groot, and shattered him. He took all but one of the creature's splinters,[16] and grew an army of violent and morbid Flora colossus.[17] The Gardener first used his army to attack and overrun the planet Telferina.[18] The army was intercepted by the Guardians of the Galaxy, among whom was Groot, who had managed to regrow his body from a splinter, but since his other remains had been grown into evil doppelgangers, he couldn't reach full size. When Groot managed to get close enough to the Gardener, he used his powers to cleanse his body of Loki's poison. With his sanity restored, the Gardener came to his senses, and his first action was to heal Groot's body, thus bringing him back to his original form in the process.[19]

Like all Elders, the Gardener was connected to the energy of the universe due to his single-minded devotion to his hobby. In addition, as with the Grandmaster's pact with Death, all Elders are unaffected by aging, disease, or toxins,[2] and are virtually immortals.[20]

Like this? Let us know!
Retrieved from "https://marvel.fandom.com/wiki/Ord_Zyonz_(Earth-616)?oldid=6438640"
Community content is available under CC-BY-SA unless otherwise noted.