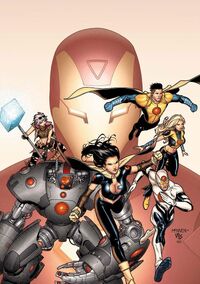 Origin
A group of ordinary people imbued with super-powers for one year to protect California through the 50-State Initiative.

Started by Tony Stark as part of the Initiative to redistribute America's superhuman protection. The California division of the Initiative was first to be called the "Champions", reminiscent of the short-lived team based in Los Angeles. This was soon changed to "The Order". In addition to its duties, the team was being used as a social experiment: there were eleven members, each with powers based on Greek gods, but each set of powers was removable and repeatable. Thus, if a member broke the team's rules, their powers could be removed and another person could take their place. After a year, each member would also be stripped of their powers and code names and return to civilian life, at which point eleven new civilians would replace the former team.[1] [2]

The team was comprised largely of celebrities known for making a difference through charitable work, and through a process involving a viral genomech payload developed by 'Hank Pym' each one was given superpowers modeled on the pantheon of Greek gods and trained at a S.H.I.E.L.D. base in Arizona. However, this process caused great strain on human bodies allowing the users limited time as a superhuman (roughly a year).[3]

After defeating Infernal Man, some members failed to follow the morality clause in their contract by going out drinking, and were subsequently fired and had their powers removed. Their replacements, Milo Fields, Mulholland Black, Magdalena Marie, and Becky Ryan were given different powers.[2]

The team would come into conflict with various villains, most with a connection to General Softly and the mysterious "M.A.N. from S.H.A.D.O.W." military group, including hordes of Zobos (mechanized zombie hobos), Cold War supervillains, Gamma monsters, Namor, and an all girl gang called the Black Dahlia who had been given superpowers via the same process as The Order by M.A.N. from S.H.A.D.O.W. as well as dealing with a murder case involving a former Order member.[4]

The team was later evicted from its California headquarters and the M.A.N. from S.H.A.D.O.W. was revealed to be a collection of General Softly Androids first devised by the Super Human Development and Operation (S.H.D.O.) fifty year earlier; around the time of the real General Samuel Softly's death, and now part of a collection of villains (including Black Dahlias and Maul) led by the son of Iron Man's old enemy Obadiah Stane. Although Stane's allies were defeated, he escaped and both Heavy and Mulholland Black died.[5]

The surviving members of the team were later seen listening to a speech performed by Ritchie Gilmore during the events of Fear Itself.[6]

Retrieved from "https://marvel.fandom.com/wiki/Order_(Initiative)_(Earth-616)?oldid=5345475"
Community content is available under CC-BY-SA unless otherwise noted.