Order of the Web 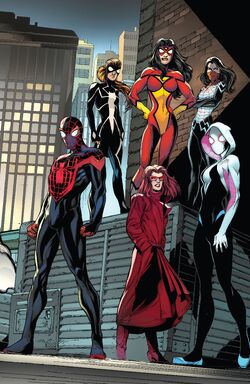 Team Aliases
Not so Friendly Neighborhood Spider-People,[1] The Order[2]

To wear the symbol of the spider is to become a totem. Team or not, all of us are connected by the Web of Life and Destiny. Out paths are tangled together. Usually that means little. Spiders are, by nature, solitary. But sometimes something happens that brings us together--

Madame Web's clairvoyance had her witness the torture and murder of Peter Parker by a bandage covered demon. Following this act, the demon turned and exposited, aware that Julia was observing, and presenting a connection to the other spider heroes affiliated with Peter.[3] When the Sin-Eater and his army made their warpath across New York to target Norman Osborn, Julia approached Miles Morales and Ghost-Spider to talk with Peter about the significance of this. After he spoke with them, Julia then took a turn to tell Peter that Norman would kill again, and Sin-Eater removing that evil could save incalculable lives. However, Peter continued on as Spider-Man to Ravencroft Institute to save Norman Osborn and stop Sin-Eater.[4]

With his choice made, Julia stood in deliberation with Miles, Gwen, Spider-Woman, Spider-Girl, and Silk on stopping Peter from saving Norman. While they all understand the temptation, Julia argued that the visions each had where in they were with Peter at different locations and he died by Norman's hands. Given that the Web of Life and Destiny was sensing a great danger nearing Peter, it was moving them to intercede. Despite strong arguments, they reached a consensus and officially teamed up. When Miles asked about Julia's vision, she merely stated that it was "something worse" as they web-swung.[5]

Psychically observing Ravenscroft's chaos from afar, Gwen had a change of heart against interfering, wishing to respect Peter's choice. After a speech and asking for another vote, the new consensus was to allow Peter to best Sin-Eater, who was temporarily suspended in liquid concrete. The Order then intercepted Norman's attempted murder of Peter, and informed their friend of their mission upon rescue. Boarding Norman's escape pod, Norman's perverse hovering around Gwen and subsequent taunts triggered a rage in Peter, who threw Norman out for Sin-Eater to find. As the others were shocked by Peter's "different choice," Julia knew that was contrary having foreseen it, and stating it was too late to change it.[6]

Traversing the river's floor, the demons taken by Sin-Eater's many cleanses were made corporeal and had found them. As the pod was breached, Julia warned Spider-Man there was no stopping the next series of events. Reaching the surface on the Hudson River, the possessed six members attacked Spider-Man on Kindred's guidance as he taunted Peter through the mouths. Following a moment of physical torture on an already overworked Spider-Man, Kindred told Peter to find them later for a "surprise" before sending the Order to "exorcise his own demons." Later that night, Kindred piloted Silk to follow Peter to the Sanctum Sanctorum, where Doctor Strange was treating him. However, when learning Peter was not properly forthright with Strange, he morphed Cindy's body and taunted Peter until he begged Kindred stop. Cindy's body was restored and she was commanded to depart, as Kindred wanted a face to face encounter, sending her and the other Spiders to attack New York. One of the locations they besieged was the bridge from Queens into Manhattan where Mary Jane was driving on, but before they could kill innocent civilians, they were freed by Kindred from a deal Peter made with the demon.

As Doctor Strange repaired the bridge, Black Cat gathered the freed Order to relocate everyone to the Sanctum, where they and Strange entered Peter's dreamscape to expedite finding him. There, they battled passed a legion of demons to find the mystic portal leading to Peter, arriving at Kindred's cemetery with their final obstacle in Sin-Eater, empowered by Morlun's taken abilities. Easily overpowered and outmatched, Julia sacrifices herself to allow Stanley to take her powers, and his new clairvoyance allows him to see the truth of Kindred and he kills himself in shattered belief. No longer endangered by Sin-Eater, the Spiders were too slow to react to Kindred's arrival as he captured them, making them his dinner guests with Peter and Mary Jane. Finally at Kindred's culmination, held hostage witnesses to Harry and Peter's "reunion" until Mary Jane was able to negotiate her life in exchange for Peter's salvation. With Norman's sudden arrival and Mary Jane's bring critically injured, the Order was powerless to stop Norman as Fisk soon encased Kindred's tomb in darkness.[7][8]

Following Kindred's defeat after Fisk captured him in a Darkforce prison, Gwen was outraged by Peter's reluctance to share answers considering she defended his right to choose how to operate back at Ravencroft, but he chose to sacrifice Norman for Sin-Eater proving her wrong. At Mary Jane's and Julia's advice, everyone was talked into waiting until a later time due to their being collectively fatigued. Despite the hell they experienced, Cindy and Anya still voted to continue helping Peter, as Jess and Julia also noted that they needed to confront the criminals no longer cleansed now on the loose. As a team, they chose to continue on and combat the increased supercriminal activity after Kindred's machinations.[2]

Equipment: As Spider Heroes, the Order uses web-shooters either mechanical or organic in combat, defense, or traversal.

Retrieved from "https://marvel.fandom.com/wiki/Order_of_the_Web_(Earth-616)?oldid=5884028"
Community content is available under CC-BY-SA unless otherwise noted.