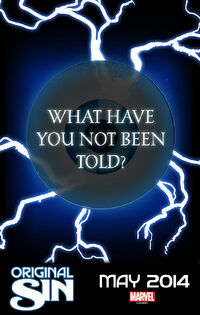 Uatu the Watcher was assassinated in his base on the Moon. Upon finding his corpse, Nick Fury began an investigation along with the Avengers. Meanwhile, a parallel investigation was carried out by Ant-Man, Punisher, Doctor Strange, Emma Frost, Moon Knight, Black Panther, Winter Soldier and Gamora, who were gathered by a mysterious boss.[1]

Nick Fury's investigation led the heroes to the Orb, who had acquired one of Uatu's eyes with the help of Exterminatrix and Doctor Midas, but claimed not to be the killer. The other investigation unveiled a hidden trace of bodies of monsters left by whomever killed the Watcher, using gamma-irradiated bullets. When the Nick Fury, the Avengers and numerous other heroes raided the Orb's base, the villain activated Uatu's eye, which unleashed a wave of energy,[2] said energy emanation caused anyone within its short range to suddenly discover deep secrets related to them.

The Orb was taken into custody and interrogated while Exterminatrix and Midas escaped. In the meantime, the Winter Soldier, Moon Knight and Gamora discovered the corpse of an Ego-like living planet, killed by the same type of gamma-irradiated bullets as the Watcher. In a turn of events, Bucky left Moon Knight and Gamora stranded in the dead planet by exploding their spaceship before teleporting away. Winter Soldier's destination was the Avengers Tower, where Nick Fury was questioning why the wave of energy didn't cause him to discover any secret, and who could have the second eye of the Watcher. Bucky mercilessly killed Nick Fury and took the eye of Uatu he had seized from the Orb as he stated there would be no more secrets.[3]

Doctor Strange and Punisher's investigation took them to another realm, where they discovered somebody had been killing monsters. Realizing that the killer had been doing that for a long time, Strange concluded that someone already knew about this, and merely sent him and Punisher to pick up his trail. Black Panther, Ant-Man and Emma Frost were returning from having discovered numerous underground monsters killed with gamma-irradiated bullets as they received the alert that Nick Fury had been killed, believing that couldn't be right, he deviated their shuttle's trajectory. As Wolverine and Hulk discovered Fury's corpse, Doctor Strange and Punisher arrived at the Tower, incapacitating the Avengers and taking the Orb with them, who Strange detected as being useful for the investigation, as he could lead them to Uatu's eye.

Black Panther's team arrived to a hidden satellite, from where the same signal which contacted him for the investigation came from. They met Punisher and Doctor Strange there, as well as Bucky. As the Winter Soldier was explaining why was he there, Gamora and Moon Knight arrived to the base, having being rescued from the dead planet by Rocket Raccoon. As Gamora fought Bucky, the head of Nick Fury the Winter Soldier was holding was revealed to be a LMD's. Bucky revealed he had tracked down the signal of the LMD's chip to the satellite. As Emma Frost was questioning Black Panther whether they were actually working for Nick Fury or not, an elder Nick Fury revealed himself, accompanied by other LMDs of him.[4]

In order to give an explanation, Nick Fury told the heroes a story about his past. During a mission in Kansas, Fury found himself trying to fight off the aliens known as Tribellians. His forces were overpowered, but the tables were turned once Woody McCord arrived and defeated the monsters before being fatally injured. Howard Stark, McCord's partner, arrived to the scene and discovered Fury alongside Woody's corpse. He decided to show Fury the work McCord had been doing as defender of Earth, the Man on the Wall, neutralizing any potential threat for the planet, and offered him Woody's job. Fury accepted and over the next years would secretly fight different super human threats, from aliens to Subterranean monsters and extra-dimensional beings, and those had been the corpses the different parties had found.

Before he could answer other questions, the Orb collapsed in the floor. Fury stated that his body was still absorbing what he stole from the Moon, and that they had to put him in the interrogation room as the clock was ticking. When Black Panther asked what happened to the Watcher, Fury replied merely that he had died, but also that he now supposed it was his turn.[5]

Meanwhile, the Exterminatrix and Midas travelled to a certain location from which he activated a hidden vessel to go back to the Moon. Back to the satellite, Fury explained the heroes that because he now lacked the Infinity Formula in his blood, he was rapidly aging and was going to die. Fury had carefully chosen those heroes to follow his trail, as he wanted one of them to be his replacement. At the Avengers Tower, Iron Man was examining the corpse of the LMD killed by the Winter Soldier, and before it self-destructed as a self-defense mechanism, Stark managed to get the location to where the LMD had sent a signal. When Fury received the alert that the LMD had self-destructed and concluded that he would soon be discovered, he took one of the Watcher's eyes from Bucky and enclosed himself in a secure room, as he tried to activate the second eye he had all this time. When the Avengers arrived to the satellite, Fury confronted the heroes, equipped with armor while holding the two eyes of the Watcher, claiming that his eyes had been opened.[6]

The Avengers failed to stop Nick Fury, who arrived to Uatu's citadel at the same time the Orb (who had escaped Fury's custody), and Doctor Midas did.[7]

Fury confronted Doctor Midas, who was trying to acquire more power than he had before when he attacked the citadel. Fury fought Midas' Mindless Ones, during which one of the Watcher's eyes was taken from him by the Orb, and was almost defeated until the heroes chosen by Fury arrived and also managed to get a confession from him that he was the one who had killed Uatu and took the second eye. Fury had done this because when he went to aid Uatu as soon as he had been attacked and robbed by the Orb and Doctor Midas, the Watcher refused to tell him the names of the culprits, at it was against his oath of non-interference. Fury had realized the eyes were where Uatu kept what he had seen, and that the only way to know the identities of the criminals before they did something with Uatu's armory was to have one of them, for which he had killed Uatu and took the remaining eye.

Fury then confronted Midas, who was becoming more powerful by absorbing the powers from Uatu's corpse. By forcing Midas to absorb the power of the Watcher's eye he had left, Fury overloaded him and killed the villain in an explosion, which also seemingly killed Fury.

The Avengers arrived on the scene, but found nothing. After the Moon was left with no presence, Fury revealed himself to be alive and to have absorbed Uatu's powers, becoming the new vigilant of Earth, the Unseen. Meanwhile, the Winter Soldier took up the mantle of the Man on the Wall.[8] 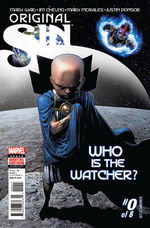 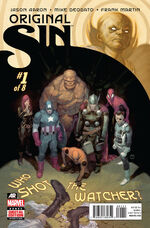 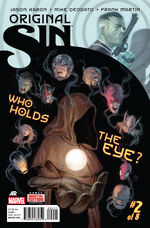 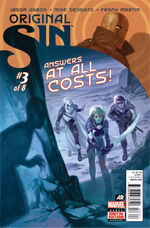 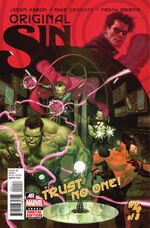 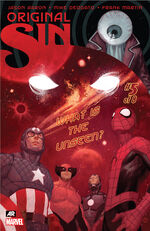 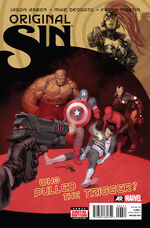 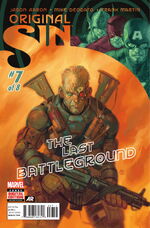 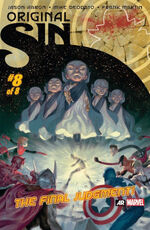 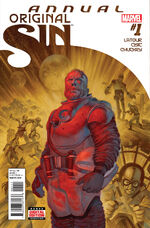 Walk the Road to Original Sin